Where do bugfixes go in the git-flow model?

In the, commonly referred to as, Git-flow model hotfixes go in their specific hotfix-* branch and small integration fixes right before release go in the release-* branch. General bugfixes from the previous version does not seem to have a place.

Where should they appear? Should they be in their own bug-* branch branching off of develop (just like feature branches)?

Coming from environments where PRs are used and aside from an individual developer committing to a feature branch, nothing should be committed directly into master, develop, or a release branch. This ensures that every change is code reviewed, along with ensuring appropriate test coverage and passing tests in a CI environment before changes go in. I would be opposed to any commits directly into one of these branches, although it appears that Gitflow by itself doesn't have any problems with committing pre-release bug fixes or changes directly into the release branch and then pulling them into development and then feature branches.

In your particular case, a release- branch isn't an appropriate place. The software has already been released and is in master. Once a release is merged into master and tagged there, the release branch for that particular release has outlived its purpose and doesn't necessarily need to exist anymore. If you're active in cleaning up your branches (which I think that everyone should be), then this isn't even an option.

If your fix isn't critical, then a hotfix branch doesn't seem to fit either. The purpose of a hotfix branch is to let someone get critical changes into production very quickly without interfering with ongoing development. Using these should be the exception rather than the norm for a development team. In general, critical hotfixes should be an exceptional case.

The only thing left is a feature branch. Note that the section of the page linked to in the question about feature branches even says that feature branches are "sometimes called topic branches". If your change is targeting any upcoming release and doesn't meet the criteria for a hotfix, it should be in one of these branches.

If its a single commit then just make a well identified commit and push it on top of the development branch, else create a feature branch.

There is also a comment from the git-flow author saying exactly what you are asking: Missing bugfix branches #24

Bitbucket has default branch prefixes that include Bugfix. The idea is that a Bugfix can be any bug fix in a develop or release branch, but a Hotfix is specific for a fix to be directly applied to master (i.e. a production bug fix): 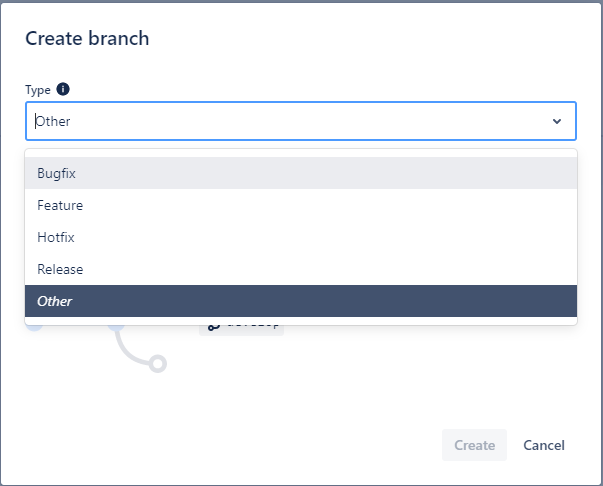 Not the answer you're looking for? Browse other questions tagged git gitflow or ask your own question.

8
Avoiding the Grid of Doom™ in Git-Flow
2
Git branch model critique: always derive from master
0
Simpler git-flow model, am I doing it right?
4
use of the master branch in Git branching models
6
How does one name branches that are bug fixes for a release branch in git-flow?
1
Why testing on release, not develop
8
Git branch model with QA and branches
0
Need feedback on proposed git flow
2
How to cope with production rollbacks when using gitflow
1
How to properly manage bugfixes for released versions in git flow