I've seen blog posts explaining how to do Git bisect, but how to you fix the bug, commit again and maintain the rest of the commit history?

An actual problem I faced in my project was like this (the image is just an approximation): 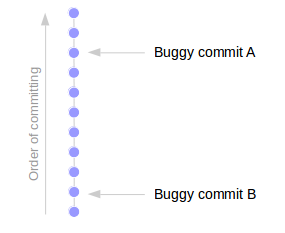 I had marked the top-most commit as bad and the bottom-most commit as good. Some of the commits below Buggy commit A were good commits, because somewhere in-between, I had commented out the code that made Bad commit B a bad commit. So naturally, git bisect led me first to Buggy commit B.

I corrected the bug and when I tried to commit, I wanted the changed lines of code to be applied to the same Buggy commit B commit. But I found out that:

Now what do I do?

Create a new branch (let's name it fixedit) and commit this corrected code? If I do, then what happens to all the other commits above it? Should I do a rebase (never done it before) of the commit above Buggy commit B and put the entire line of commits onto the new fixedit branch?

I would prefer that I'd just be allowed to modify the existing commit and the entire tree would remain as it is, but then I'd have to go to all the commits above Buggy commit B and fix the buggy line in all those commits. That doesn't make sense. So how does one fix bugs and yet retain commit history properly?

So I do a git bisect reset and fix the code on the topmost commit (because I know which line of Buggy commit B introduced the bug)?

Like I mentioned earlier, the code that caused Buggy commit B was commented out in one of the commits just before Buggy commit A.

You don't fix that commit. It's a fact that the bug was introduced, and that's okay. You found it now and know how to fix it, great! Like with any other bug fix, you create a new commit on top of the current state of the project. This retains the history and fixes the bug. Rewriting the history so that the bug never existed is pointless, even dangerous:

Not the answer you're looking for? Browse other questions tagged git or ask your own question.

5
Is there a defined way to create a commit history for Git
14
Is it fine to have broken intermediate commits, as long as the final commit in any push works?
13
What's the proper way to check commit data in Git?
1
Git commit messages with nvie branching model
15
What's the best way to undo a Git merge that wipes files out of the repo?
3
Create separate GIT repository for publishing with different history?
0
Recommendations to organize code changes in GIT
5
Should I merge all commits from an experimental branch or only the valid one?
0
TDD vs. git bisect