Why do most mainstream languages not support “x < y < z” syntax for 3-way Boolean comparisons?

If I want to compare two numbers (or other well-ordered entities), I would do so with x < y. If I want to compare three of them, the high-school algebra student will suggest trying x < y < z. The programmer in me will then respond with "no, that's not valid, you have to do x < y && y < z".

Most languages I've come across don't seem to support this syntax, which is odd given how common it is in mathematics. Python is a notable exception. JavaScript looks like an exception, but it's really just an unfortunate by-product of operator precedence and implicit conversions; in node.js, 1 < 3 < 2 evaluates to true, because it's really (1 < 3) < 2 === true < 2 === 1 < 2.

So, my question is this: Why is x < y < z not commonly available in programming languages, with the expected semantics?

These are binary operators, which when chained, normally and naturally produce an abstract syntax tree like: 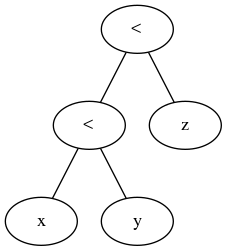 When evaluated (which you do from the leaves up), this produces a boolean result from x < y, then you get a type error trying to do boolean < z. In order for x < y < z to work as you discussed, you have to create a special case in the compiler to produce a syntax tree like: 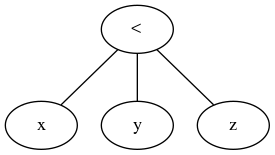 Not that it isn't possible to do this. It obviously is, but it adds some complexity to the parser for a case that doesn't really come up that often. You're basically creating a symbol that sometimes acts like a binary operator and sometimes effectively acts like a ternary operator, with all the implications of error handling and such that entails. That adds a lot of space for things to go wrong that language designers would rather avoid if possible.

Why is x < y < z not commonly available in programming languages?

In this answer I conclude that

I can speak from a Pythonist's perspective on this question. I am a user of a language with this feature and I like to study the implementation details of the language. Beyond this, I am somewhat familiar with the process of changing languages like C and C++ (the ISO standard is governed by committee and versioned by year.) and I have watched both Ruby and Python implement breaking changes.

From the docs/grammar, we see that we can chain any number of expressions with comparison operators:

and the documentation further states:

Comparisons can be chained arbitrarily, e.g., x < y <= z is equivalent to x < y and y <= z, except that y is evaluated only once (but in both cases z is not evaluated at all when x < y is found to be false).

is logically equivalent in terms of evaluation of x, y, and z, with the exception that y is evaluated twice:

Again, the difference is that y is evaluated only one time with (x < y <= z).

(Note, the parentheses are completely unnecessary and redundant, but I used them for the benefit of those coming from other languages, and the above code is quite legal Python.)

We can inspect how Python parses chained comparison operators:

So we can see that this really isn't difficult for Python or any other language to parse.

I personally find the range semantics to be quite elegant, and most Python professionals I know would encourage the usage of the feature, instead of considering it damaging - the semantics are quite clearly stated in the well-reputed documentation (as noted above).

Note that code is read much more than it is written. Changes that improve the readability of code should be embraced, not discounted by raising generic specters of Fear, Uncertainty, and Doubt.

So why is x < y < z not commonly available in programming languages?

I think there are a confluence of reasons that center around the relative importance of the feature and the relative momentum/inertia of change allowed by the governors of the languages.

Similar questions can be asked about other more important language features

Why isn't multiple inheritance available in Java or C#? There is no good answer here to either question. Perhaps the developers were too lazy, as Bob Martin alleges, and the reasons given are merely excuses. And multiple inheritance is a pretty big topic in computer science. It is certainly more important than operator chaining.

Comparison operator chaining is elegant, but by no means as important as multiple inheritance. And just as Java and C# have interfaces as a workaround, so does every language for multiple comparisons - you simply chain the comparisons with boolean "and"s, which works easily enough.

Most languages are governed by committee

Most languages are evolving by committee (rather than having a sensible Benevolent Dictator For Life like Python has). And I speculate that this issue just hasn't seen enough support to make it out of its respective committees.

Can the languages that don't offer this feature change?

If a language allows x < y < z without the expected mathematical semantics, this would be a breaking change. If it didn't allow it in the first place, it would be almost trivial to add.

Regarding the languages with breaking changes: we do update languages with breaking behavior changes - but users tend to not like this, especially users of features that may be broken. If a user is relying on the former behavior of x < y < z, they would likely loudly protest. And since most languages are governed by committee, I doubt we would get much political will to support such a change.

Now argument promotions: In C or C++, arguments would be promoted to a common type. So what does x < y < z mean of x is double but y and z are long long int? All three promoted to double? Or y is taken as double once and as long long int the other time? What happens if in C++ one or both of the operators are overloaded?

Well, it all gets very complicated. Now what I wouldn't mind is x < y < z producing a syntax error. Because the usefulness of it is small compared to the damage done to beginners who can't figure out what x < y < z actually does.

In many programming languages, x < y is a binary expression that accepts two operands and evaluates to a single boolean result. Therefore, if chaining multiple expressions, true < z and false < z won't make sense, and if those expressions successfully evaluate, they're likely to produce the wrong result.

It's much easier to think of x < y as a function call that takes two parameters and produces a single boolean result. In fact, that's how many languages implement it under the hood. It's composable, easily compilable, and it just works.

The x < y < z scenario is much more complicated. Now the compiler, in effect, has to fashion three functions: x < y, y < z, and the result of those two values anded together, all within the context of an arguably ambiguous language grammar.

Most mainstream languages are (at least partially) object-oriented. Fundamentally, the underlying principle of OO is that objects send messages to other objects (or themselves), and the receiver of that message has complete control over how to respond to that message.

Now, let's see how we would implement something like

We could evaluate it strictly left-to-right (left-associative):

Nah, that doesn't make sense either. Now, we have a < (something that's a Boolean).

Okay, what about treating it as syntactic sugar. Let's make a chain of n < comparisons send an n-1-ary message. This could mean, we send the message __lt__ to a, passing b and c as arguments:

What about interpreting it as an n-ary message send to this?

From a mainstream standpoint that seems weird. However, e.g. in Haskell, that's normal. There can be multiple different implementations of the Ord typeclass, for example, and whether or not a is less than b, depends on which typeclass instance happens to be in scope.

But actually, it is not that weird at all! Both Java (Comparator) and .NET (IComparer) have interfaces that allow you to inject your own ordering relation into e.g. sorting algorithms. Thus, they fully acknowledge that an ordering is not something that is fixed to a type but instead depends on context.

A far as I know, there are currently no languages that perform such a translation. There is a precedence, however: both Ioke and Seph have what their designer calls "trinary operators" – operators which are syntactically binary, but semantically ternary. In particular,

This could easily be generalized to n-ary operators.

Note that this is really peculiar to OO languages. In OO, we always have one single object which is ultimately responsible for interpreting a message send, and as we have seen, it is not immediately obvious for something like a < b < c which object that should be.

This doesn't apply to procedural or functional languages though. For example, in Scheme, Common Lisp, and Clojure, the < function is n-ary, and can be called with an arbitrary number of arguments.

In particular, < does not mean "less than", rather these functions are interpreted slightly differently:

It's simply because the language designers didn't think of it or didn't think it was a good idea. Python does it as you described with a simple (almost) LL(1) grammar.

The following C++ program compiles with nary a peep from clang, even with warnings set to the the highest possible level (-Weverything):

The gnu compiler suite on the other hand nicely warns me that comparisons like 'X<=Y<=Z' do not have their mathematical meaning [-Wparentheses].

So, my question is this: why is x < y < z not commonly available in programming languages, with the expected semantics?

The answer is simple: Backwards compatibility. There is a vast amount of code out in the wild that use the equivalent of 1<3<2 and expect the result to be true-ish.

A language designer has but one chance at getting this "right", and that is the point in time the language is first designed. Get it "wrong" initially means that other programmers will rather quickly take advantage of that "wrong" behavior. Getting it "right" the second time around will break that existing code base.

Not the answer you're looking for? Browse other questions tagged language-agnostic syntax language-features comparison operators or ask your own question.