How to improve timeout value dynamically?

I'm working on an application where I want to keep a timeout value computed dynamically using a moving average of say 100 previous response times for service A.

This value + some buffer (~3 seconds) will be used as a timeout for network requests to service A. The problem here is, I want this timeout to improve with network characteristics- this is not a problem when user switches from a slow network to a faster network, but in the opposite case, the timeout should increase 'gradually', EXCEPT in scenarios where connection was spotty (like in a parking garage), in which case I don't want this timeout to increase since this is transient.

I'm not sure if it's even possible to distinguish between the 2 cases mentioned above. Even if not, what should I record as the response time when a request times-out? I was thinking of recording (currentTimeoutValue + 2) seconds, this works well for parking garage case (doesn't push the average up dramatically) but if someone's going to be on a slower network for a while, this will take many more timed-out requests to catch up with current network speed.

Any pointers are appreciated.

Here how your timeout based on moving average could evolve in two situations: 1) with a slow increase and 2) with a quick change, as for example when you pass a tunnel with your phone, or if you're in an elevator: 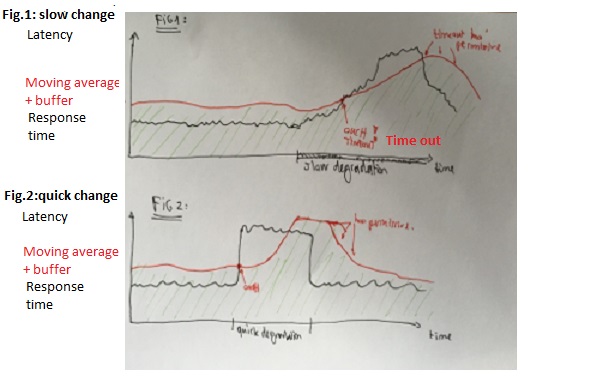 There will be a timeout, only if your response time increases fast enough to burn the buffer time. But it's not possible with one moving average to notice if the increase of response time is fast or not, because it's averaged.

You can make your timeout adaptation more aware of brutality of change by using a second moving average: the first would average the 100 last response times and the second would only take the 10 or 20 last ones. By comparing the two you can get an idea of how brutal the change is and adapt the reaction :

Of course you'll have to fine tune what difference between both moving average would be relevant to make the switch.

I assume this is an application on a mobile device which tries to call the service. If your mobile device can detect the difference between "no network available" and "network available (though slow)", then you are in a much better situation, since if the network is not available, you simply do not change the timeout.

For the other, "standard" case, you could try something like

Not the answer you're looking for? Browse other questions tagged algorithms math networks or ask your own question.

6
Algorithmic problem - quickly finding all #'s where value %x is some given value
2
Algorithm to calculate estimated future usage of a defined value
2
How do you program a way to create mathematics formulas?
0
How best to implement a local-area peer to peer network
1
Algorithm to find the fewest number of values (from a set of values) where the sum equals a value (+ one more condition)
1
How can an iterative algorithm be controlled dynamically?