Splitting API and Implementation among packages/jars 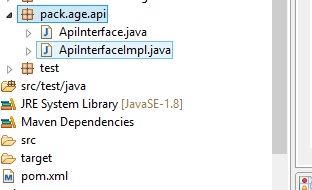 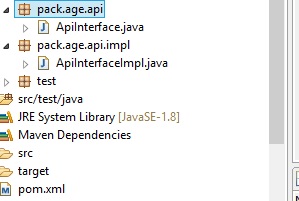 In the first case we have API and imlementation in the same package which (may) simplify access to it. But in the second case we may also split it into a different jar file which would support more "encapsulation" from a particular implementation.

Personally, I would choose splitting them up to different jar files in order to keep API in isolation from implementations.

Well, I think the best guide are the Package Principles, and more specifically the three about package cohesion (what should be grouped into packages).

The first and the third offer some ground for splitting up the API and its implementation into different packages.

From the remaining principles (those of coupling) :

it is clear that the second and third also implicitly argue for separating the API from the implementation.

Not the answer you're looking for? Browse other questions tagged java api or ask your own question.

1
Implementation details of database synchronisation API
2
Am I overdoing stuff when I sever interfaces from concrete implementations?
15
Unit testing an API client and wrappers
0
Interface design of Java library with interdependent yet decoupled packages
0
Hiding implementation framework usage in an API
8
How to minimize a Java library's exposed interface surface while breaking down the library into subpackages?
0
API Split for creating object with inheritance and behaviors
1
How to define vertical slice in a system whose horizontal slices are defined by Java modules?