Does there exist a programming language specifically designed for dependency injection?

Many general programming languages are flexible enough to allow you to support dependency injection. Even without library or framework support. But even if a language is Turing complete enough to solve any programming problem, a language makes choices that impact what is easy and what is hard to do in them.

Is there any language that was specifically designed to make dependency injection easy, and conversely, make creating hidden dependencies hard?

Due to limitations of some languages (looking at you Java) many people regard assistance with wiring and construction as part of dependency injection. Here I only intend a language designed for DI to mean that dependency's are not easily hidden in side effects. Having a convention over configuration system as well would only be added gravy.

I'm not looking for a language recommendation. It's a historical question. Has any language author ever explicitly set out to do this?

Yes, there is indeed. Sort of.

So, the language is not designed for DI, rather the necessity for DI is a consequence of the language design.

If there is no static state and no global state, then you cannot just "reach out" in to the ether and pull something out. For example, in Java, the package structure is static state. I can just say java.lang.String and I have myself the String class. That is not possible in Newspeak. Everything you work with, has to be explicitly provided to you, otherwise you just can't get at it. So, everything is a dependency, and every dependency is explicit.

How far down the rabbit hole does this go? Where does the recursion stop? All the way, actually. It doesn't stop. Then, how can you write a program in Newspeak? Well, strictly speaking, you can't!

You need some outside entity that ties it all together. In Newspeak, that entity is the IDE. The IDE sees the whole program. It can wire the disparate pieces together. The standard pattern in Newspeak is that the central class of your application has an accessor called platform, and the Newspeak IDE injects an object into that accessor that has methods which return some of the basic necessities of programming: a String class, a Number class, an Array class, and so on.

If you want to test your application, you can inject a platform object whose File method returns a class with dummy methods. If you want to deploy your application to the cloud, you inject a platform whose File class actually is backed by Amazon S3. Cross-platform GUIs work by injecting different GUI frameworks for different OSs. Newspeak even has an experimental Newspeak-to-ECMAScript compiler and HTML-backed GUI framework that allows you to port a fully-featured GUI application from native desktop into the browser with no changes, just by injecting different GUI elements.

If you want to deploy your application, the IDE can serialize the application into an on-disk object. (Unlike its ancestor, Smalltalk, Newspeak has an out-of-image object serialization format. You don't have to take the entire image with you, precisely because all dependencies are injected: the IDE knows exactly which parts of the system your application uses and which it doesn't. So, it serializes exactly the connected subgraph of the object space that comprises your application, nothing more.)

In Newspeak, the equivalent declaration means: create a getter method named Foo and make it return a class that looks up its superclass by calling the method named Bar. Note: this is not like Ruby, where you can put any executable Ruby code as the superclass declaration, but the code will only be executed once when the class is created and the return value of that code becomes the fixed superclass. No. The method Bar is called for every single method lookup!

This has some profound implications:

Note that the way a Newspeak programmer is actually going to see the class(es) is like this: 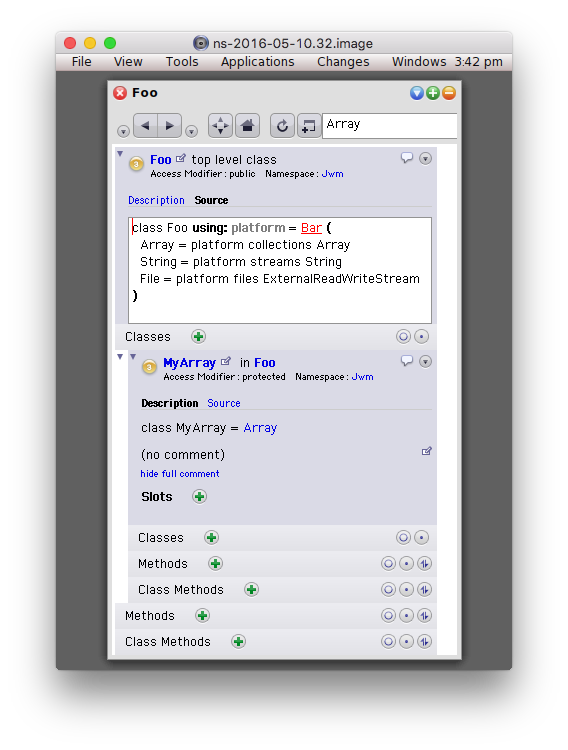 I can't even begin to do it justice, though. You'll have to play around with it yourself. Gilad Bracha has given a couple of talks about various aspects of the system, including modularity. He gave a really long (2hr) talk, the first hour of which is a thorough introduction to the language, including the modularity story. Chapter 2 of The Newspeak Programming Platform covers modularity. If you skim Newspeak on Squeak – A Guide for the Perplexed (aka Newspeak-101), you get a feel for the system. Newspeak by Example is a live document (i.e. it is running inside the Newspeak-on-ECMASCript port, every line of code is editable, every result is inspectable) demonstrating the basic syntax.

But really, you have to play around with it. It is just so different from all mainstream and even most non-mainstream languages that it is hard to explain, it has to be experienced.

It's not a practically useful language, but the system described in this paper.has an interesting effect: it allows you to write an abstract class using abstract classes/interfaces (including instantiating them) Your class can then be made concrete by substituting a subclasses of each abstract class you've used at the point of instantiation. Doing so removes the need for dependency injection in at least simple cases, for example (using a hypothetical version of Java extended with this feature) we could take this code:

and replace Client and its usage with:

Note that this simplifies the point of use of a dependency, rather than creation. It also allows us to avoid the Factory pattern (as a new I can be created on demand whenever we want).

Not the answer you're looking for? Browse other questions tagged programming-languages language-design or ask your own question.

10
How could dependency injection be integrated into the language?

2
What's a good way to prepare for this course titled "Programming Language Security"?
4
What API is required for code completion/syntax highlighting/similar IDE features?
4
Does this kind of programming language exist?
4
Does a Completely Full-Featured Intermediate Language Exist?