How to cope with very similar projects

At our company, we maintain three products, which are quite similar, in 2 Projects.
All Java, using Maven for dependencies.

These three products evolved out of another project, which is now a maven dependency of the two Projects. 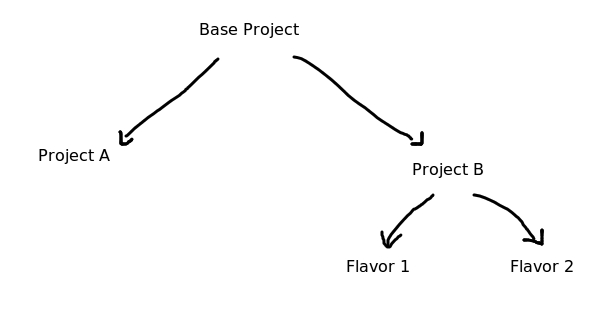 Project A and B are so similar, that essentially every bug fix for A has to be copied or merged for project B.
The Flavors of Project B, on the other hand, describe very distinct differences in behaviour between these two. For example other items in a right click menu. This had been accomplished by very ugly if-else-monsters, which have partly vanished in favor of a more OOP like approach, but now lead to another problem: where to organize these flavor dependent classes?

At the time being, we deploy our projects with profiles for the different maven builds.

Our goal is to merge both Projects (possibly also with the base project) into one with distinct flavors.

My Question is now: how to Organize this?
Our main approach is, to enhance Project B with the features of Project A by defining a third flavor for Project B and let A gradually be superfluous, so that our bug fixes have to be done in only one place.
So We imageined our Project structure roughly like this:

Inside of the business logic, we would then inject one XyHandler, which is implemented in every flavor and will be populated by our beans.xml

Does this seem to be maintainable? Or even desirable? Every idea is welcome!

The common codebase is just that huge, we have to find a way to combine those two Projects.

Code that is common to A and B should be moved to the base project. If anything is left in A after doing that move it to flavor 3. When you're done B should only have flavors in it.

It's really that simple unless there is something you've left out. Remember, projects exist for conceptual separation more than anything else. If having multiple projects is a problem merge them. If you keep them, just make what each is for very clear.

Alternatively you can do something I'm more used to. Each product gets its own project. Base gets everything common.

The real trick is getting people to stop duplicating work across projects. Figure out who and why this is happening and be sure it stops.

I would consider defining a flavor by a configuration file rather then a collection of interfaces.

Whenever your code needs to behave differently for different flavors, it should read the relevant piece of information from the configuration. For example, when the user right-clicks on an item, the code decides which items to display in the menu depending on which features were enabled. The dependency injection can inject a different implementation of Frobnosticator depending on the value of frobnosticator_mode. When the user tries to import a cow, the app can check the supports_cow configuration.

Not the answer you're looking for? Browse other questions tagged java project-management project-structure maven or ask your own question.

1
How to utilize Xcode project & target to manage products?
12
Separating java projects
19
Best way to structure a Git repository for Maven
5
Structuring projects in a solution for interfaces
2
How to keep track of maven dependency updates in projects?
2
How to depend on forked external dependencies?
1
Java package naming conventions (in maven modular project)
2
How does COCOMO handle large projects that could be split up into smaller projects?