I am really reconsidering my current class hierarchy for timeslots (in a schedule). I wanted to make them as flexible as possible so it would cover many possibilities of what we could understand as a timeslot, so I ended up with this design:

All timeslots share a chronological/hierarchical order so we're able to define comparing functions. It provides the most basic means of determining if a timeslot comes before or after another.

This is the "base" timeslot, it just has a chronological order integer.

This is for timeslots that define a range, that is, the span of the timeslot in the schedule, for example 10 minutes, 1 hours, 3 days, etc... To represent this we use a TemporalAmount member. However, the starting point of the timeslot is unknown or irrelevant.

Then we have this timeslot which is like the previous one but it does define a definite starting point using the Java 8 interface TemporalAccessor. This way we can say when a timeslot starts, like a particular day or hour with LocalDate, LocalTime, DayOfWeek, etc.

Finally there's this timeslot that doesn't define a duration because it is unknown or irrelevant, but we know the starting time. It is exactly like a RangedTimeslot but I wanted to keep this last one as an abstract class in case we needed further hierarchy expansion. 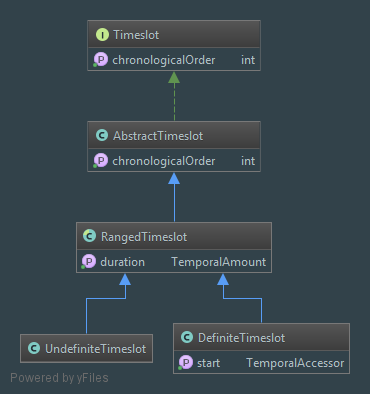 Now I am wondering if this is making things harder than they actually are. The first big wall I am facing with this design is that now I need to serialize and deserialize as JSON many of my classes, like Tournament and Schedule, and they include these timeslot classes. This kind of polymorphism makes it kind of a hell to deal with serialization and deserialization (I am using Jackson), so I just started wondering if this is a good design and if it'd be a good idea to "simplify" it. I'd still have to face the polymorphism problem of TemporalAmount and TemporalAccessor but that's kind of inevitable.

I think the other way of thinking this scenario is cutting the whole tree and be left with just a Timeslot class with Optional members so every situation where we want undefined starting times and/or undefined timeslot span are covered. We would end up with a class more or like the one that follows:

What do you think is the best design? Should I dump my current hierarchy and take the last solution? Would it make testing the class easier? (I already have tests for the current design)

Your question is "design A or design B?" and my answer is neither. Actually, I'm going to say that aside from the interface, your Timeslot class doesn't really matter and that both of these designs are a result of coming at this from the wrong direction.

At the risk of overextending an analogy, consider the question: 'what is a slot?' A slot is a type of hole. And we all know that the question "how many holes does it take to fill X?" is nonsensical.

Kidding (sort of) aside, you really shouldn't have a public constructor on your timeslot class. Timeslots are really an attribute of a calendar. Trying to use them in isolation or trying to build the calendar from (heterogeneous) timeslots is problematic at best. If I were designing something in this area, I would make the timeslots inner classes or even anonymous inner classes of a schedule class. Here's an example of how that might look from an API perspective (this could be very different depending on what you need to achieve e.g. are timeslots of fixes size or of varying size):

The only place timeslots would be created is within the Schedule object. This allows the timeslots to be created in a consistent and reliable way. For example, if the timeslots can be created and passed in, it's harder to avoid getting the same slot created twice or perhaps you might get overlapping slots.

Once you get to this point, you should realize that a timeslot is just a porthole view of the whole schedule and the hierarchy has no need to exist because the structure is based on how the schedule is managed.

Jackons is used to serialize "dumb" POJO, there you have object with intelligence (TemporalAccessor), this is not compatible.

I'll develop the 3rd choice, this would give something like :

Not the answer you're looking for? Browse other questions tagged java design or ask your own question.

1
Are Protected Auto-Cast Methods Ok?
7
Is using protected inheritance to hide (but exploit) implemented interface from the public ok?
6
What is the process of determining which method in a class hierarchy should execute known as?
4
OO design choice and single responsibility principle
3
Why 'List<E>' is an 'interface' but not 'abstract class'?
8
C++ Header files design : just like defining an API?
16
Should I unit test my subclasses or my abstract parent class?
4
Redesigning schedule value hierarchy
4
Designing generic type inheritance hierarchy
0
Object Oriented Design of Callback Methods