What layer should contain interactions with external or remote resources which are not strictly data operations?

Assume an application with a layered architecture, i.e. presentation, business/domain/logic, data access: it makes sense to plug access to external APIs in at the data layer if what they do resembles data operations. For instance, a DLL that simply performs CRUD operations against a particular data repository would go in the data access layer.

What I'm a little confused about is where to incorporate actions that don't perform data operations in the strict sense, i.e. they perform operations that somewhat resemble "data" in a more-loose sense because they work on remote or networked resources. Here are a few examples:

I'm tempted to put these in the data layer since a lot of resources I've read indicate this. For instance, this MSDN article about "Data Layer Guidelines" has both "Data Sources" and "Services" hanging off the data layer, and it states about "Services":

When a business component must access data provided by an external service, you might need to implement code to manage the semantics of communicating with that particular service. Service agents implement data access components that isolate the varying requirements for calling services from your application, and may provide additional services such as caching, offline support, and basic mapping between the format of the data exposed by the service and the format your application requires.

However, this is talking about external services which are specifically performing data operations and makes no mention of the other types of somewhat-data-like operations like I have listed above.

Can someone please offer guidance or some of their experiences on this topic?

It sounds like you're describing the onion architecture, a form of n-tier architecture -- which is just a fancy way of saying it has components broken out into layers.

The layer you're focusing on is the Infrastructure layer. Data is the most common component of infrastructure. But other functions can be contained in separate libraries in the same layer.

Architecture is a subjective thing. The best I can do is offer you how I would set up the project.

If you want to be really explicit about your layers, you can use solution folders to separate things out. 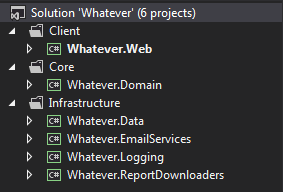 And in the end, once I had an intuition for what concerns belong in which layer, I found I didn't even really need the solution folders:

Just by glancing at that, it's clear to me that the shared models are in the Core, the client is the Web, and everything else is there to support as infrastructure. But if I started getting many more projects in each layer, then I could switch back to organizing with solution folders.

For extra credit, I might mention that personally my Core/Domain layer would have interfaces for the Infrastructure services: 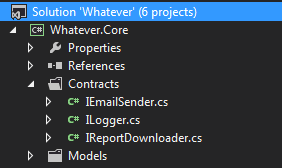 And the infrastructure library would then implement that interface, so you can always 'swap out' the dependency, to whatever other library implementation.

The implicit assumption of these terms is that you have some large database which your app runs off and you want to separate and abstract that from your applications or 'Business Layer'. You want to avoid polluting your 'should be available for all uses, past present and future, data' with your 'business logic of the day'

But you example cases are a bit more modern in their thinking, connecting to various 'Services' which provide random functionality to the caller.

The answer is that Your 'Business Layer' is still king. It should consume services, some of which are your traditional 'Data Access Layer' but the very fact that you abstract that layer means the Business layer doesn't know that that service is in the Data Layer.

It could be just some encapsulated in memory logic which is also part of your business layer, it could be an external third party or it could be a local file system.

Okay... a simple answer. When I'm building a project that has 'perpendicular' behavior (connecting to external systems, writing to log files, etc) I do it through a library and generally make the calls to it in the business layer. The business layer typically is where the action requiring external access is taking place, and by building the capability into a library I can reuse it in other projects. Libraries are Good. Keep your controllers in the business layer simple and push the weird stuff into libraries or else you'll get tripped up later.

When I need to make something that's not-data-layer look like data-layer it's usually either a code smell indicating I really should to be putting the code in a library, or it's just something I'm hacking temporarily.

Well there is no generic answer, for some it's a matter of opinion so i won't answer in a generic way but i'll take your points one by one. I'm answering considering that all of those will be designed as simple interface. Not implementation.

a web service that downloads a PDF of a SQL Server Reporting Services (SSRS) report.

This could be just part of a Util class called in business layer. Or if you consider a bit wider, it's about reading files, whether they're remote or not. It's just a data access IMO. Only the true (not test :)) implementation will make it remote.

So it's about read or write in a mailbox ? What is the difference with a read/write to a database ? The answer is the implementation. So raw reading /Writing is just data access. Of course parsing the file to generate some data or choosing what to put in the file to sent belong to the business layer.

And since you have both SMTP/Micrisoft exchange, you would have 2 different implementations. Business will say which one he wants to use.

direct interactions with the file system, such as writing to a log file, using built-in programming language functionality

Again this is about storage, still reading/writing data access. In my case i have FileService that can save any file to the system and returns a FileInfo objects stored in database, so object can be linked to the file.

5
Which layer does async code belong?
445
How accurate is "Business logic should be in a service, not in a model"?
6
Where should business logic go in a layered architecture?
6
How can you separate a monolith into domain-driven libraries without duplicating interfaces and still keep dependencies simple?
11
How is transactionality implemented in DDD applications?
0
3-tier data access layer usage
1
Can I use Application Service and Business Objects patterns to simplify and better execute biz processes?
1
Adding Security Layer for multiple services
0
Questions about Direct access to data source from Services
5
Is My Data Access Layer Really My Domain?