In an enterprise architecture, where is Service Locator most appropriately used, and why?

I'm trying to implement the Service Locator pattern. In the below diagram is my references between projects (.net projects), each box represents a project.

The arrows indicate the dependencies.

I am asking if this is a correct implementation of this pattern or is there a better way?

I am asking if this is a correct implementation of this pattern or is there a better way?

Not exactly. Your service locator, in an ideal scenario, doesn't depend on any interfaces - it's just a dumb container/map/factory. Something (reflection, manual coding, inheritance, some serialized form, etc) populates it, and then when consumers ask for an instance that satisfies some arbitrary interface, the service locator provides it. Depending on how it's implemented, it doesn't even depend on data - its consumers tell it where to go.

In an enterprise architecture, where is Service Locator most appropriately used, and why?

All that said, the service locator is commonly viewed as an anti-pattern since the contract it supplies (you ask for an arbitrary interface, I give you an instance that satisfies it) is very broad. It tends towards being a God Object. It tends to be a bit fragile since errors in use only show up at runtime.

Those downsides are true, but anti-pattern implies it always produces badness when used. That is not the case in my experience.

Service Locators are useful when you have many, dynamic components that need to be resolved at runtime - components that will vary depending on the context you're working in. For example, I've seen it used when emulating a variety of hardware devices, each with their own configuration and capabilities. It was just as easy to unit test as IoC containers, had similar runtime errors, but supplied the necessary flexibility that IoC containers could not.

But that sort of scenario is exceedingly rare. In general, having that sort of arbitrary type lookup isn't worth the cost.

I know that the question is about Service Locator, but

is there a better way?

Yes, allow me to suggest a better design for your solution.

First of all I suggest using Dependency Injection via Constructor + DI Container instead of Sevice Locator pattern. Service Locator has a number of downsides. Long story short: 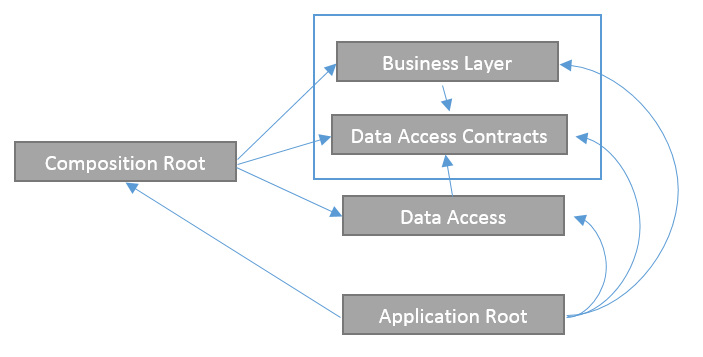 Btw, here is an excellent book about the subject: Dependency Injection in .NET

Not the answer you're looking for? Browse other questions tagged enterprise-architecture service-locator or ask your own question.