On page 85 of Leo Brodie's book, Thinking Forth, he describes a component which he calls the "Interface Component." He describes its differences from, and benefits over a standard interface as follows:

When it comes to data interfaces between modules, traditional wisdom says only that â€śinterfaces should be carefully designed, with a minimum of complexity.â€ť The reason for the care, of course, is that each module must implement its own end of the interface (Figure 3.8).

He goes on to introduce the concept of the Interface Component:

Thereâ€™s more to good interface design than that. Allow me to introduce a design element which I call the â€śinterface component.â€ť The purpose an interface component is to implement, and hide information about, the data interface between two or more other components (Figure 3.9). 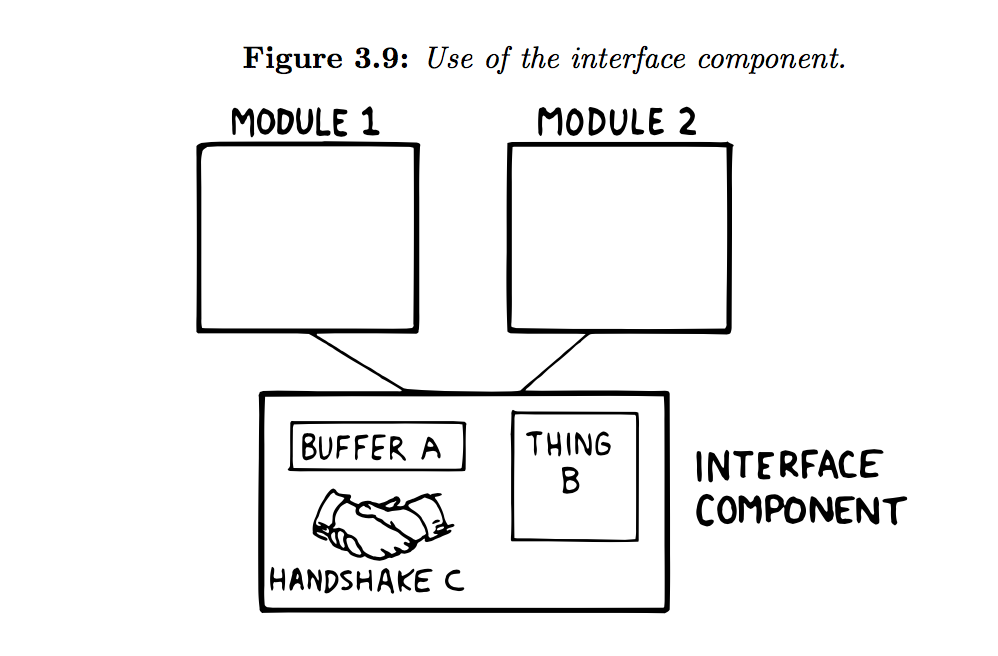 Is this pattern applicable when programming in Java? Interfaces in Java are similar to those depicted in Figure 3.8 above. If an interface component object were to be introduced, wouldn't it, along with the two other objects all need to adhere to the Interface defined? I do not see what benefits the interface component would provide.

Rule #1 when reading any programming or computer science text: "interface" never refers to the Java interface construct. (Rule #1b: except when the text is specifically about the Java language. And even then, it's not guaranteed.)

In this particular case, it sounds like "interface" is used in the generic computer science sense of information hiding, data abstraction and modularity, i.e. the distinction between private hidden internal implementation details and a public way to use the module, aka its interface.

The way to counter this, is to extract a third module which manages the interaction between the two modules.

Not the answer you're looking for? Browse other questions tagged java design design-patterns interfaces modularization or ask your own question.

43
Why should I declare a class as an abstract class?
3
Can Objective C categories serve the same purpose as Traits do in Scala?
22
Empty interface to combine multiple interfaces
111
Why were default and static methods added to interfaces in Java 8 when we already had abstract classes?
2
If polymorphism is the ability of different types to share the same interface, is there a name for a single type that fulfills different interfaces?
2
Human and AI subclasses for Player class
2
Design of a modular application