How to design the interactions between these agent behaviors?

I want to design the class architecture for an agent that interacts with an environment by repeating three steps until the end of an episode: First, the environment provides an observation to the agent. Second, the agent chooses an action in response. Third, the environment rewards the action by a reward. The agent is composed of partial behaviors, for example:

In summary, observations, actions, and rewards can flow between the behaviors before producing the action for the environment. Here is an example interaction of two behaviors with an environment (observations are blue, actions are red, rewards are yellow): 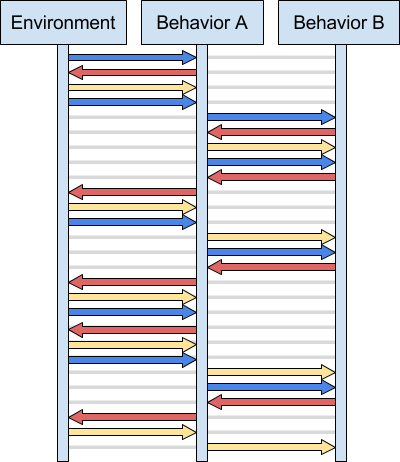 The behaviors should not know of each other, so that I can add additional behaviors in between existing ones or stop the simulation at any time. How can I design this? Are there any patterns to simplify the dynamic interaction between my behaviors?

Your formulation lends itself to actors. Just replace "agent" with "actor" and your arrows with "messages" and you're there.

You could take a look at actor libraries like Akka or Actor-based languages like Erlang. The general idea of actor models is also well-described on wikipedia.

Additionally, libraries like Akka also support explicit behavior of actors and changing it. Think of it as replacing the method that handles incoming messages by a complete different method doing different things for the same messages. It's up to you to find out, whether your use cases profit more from having different actors per behavior, or whether modelling actors with changing behaviors is more appropriate.

Edit - to address your concerns:

Yes, actors are inherently parallel, however, the actual communication sequence can be sequentialized. If you let your actors block and wait for an answer, you essentially get a synchronous process (albeit I agree it may no longer be a natural match).

The order could be determined by the environment actor. You send the observation, wait for the resulting action and send the reward. Or behavior-changing actors could be used to design this sequence (i.e. after sending the observation, the actor changes its behavior to a new one in which it can only accept actions).

In terms of having to respond in a certain way, the concept of channels may be interesting to you. In Akka (not sure about Erlang there) you can define typed channels, which basically gives you a type-safe communication where only messages of certain types can be exchanged via the channel. Hence, you can ensure things like the response having to be this or that.

Not the answer you're looking for? Browse other questions tagged design-patterns architecture or ask your own question.

1
How to deal with interactions between many objects
8
How can I avoid tight coupling when practically every decision-logic has to check lots of distributed state?
1
Design pattern for different code behaviors according to different clients
3
How to use the MVP pattern in embedded systems?
2
Designing interactions in Object Oriented Design
0
Design Pattern similar to ESB
0
What architecture design is used to create a virtual queue?
1
Clean Architecture: Can Use Cases Imply UI?
0
How to choose between these different options for communicating between objects?
0
Pattern name to compare previous raw values to current values