I started working in a project around 3 months ago and since I joined I saw so many mistakes in the whole design - the architecture is completely dysfunctional and badly implemented and a lot of used concepts like Inversion of Control are implemented in a way which completely goes against any proper conventions. People have different opinions, knowledge, experience and it's completely fine to solve a problem using different approaches the problem is when things are implemented in a very wrong way. Given that there are so many issues with the current design I will describe one as an example.

We have a good few components and each is defined by a set of different projects (we are using C#) like so:

In the IoC project we have a couple of windsor castle installers to configure the dependencies for that specific component, so given the example above we would have two installers one per each component

Now let's say that the Services component has an indirect dependency on the Repositories - which is a typical setup - in our case the Services project has a direct reference to the Repositories project and calls a static method in the RepositoriesIoCManager type to initiate the IoC installer. This setup only works because we have a single product/region and no CI, and it would easily break in case we had different Repository implementations for the same interface, you just could not swap the different DLLs during the build/package/deploy process cause everything is statically referenced.

Among other issues, this just makes the use of IoC completely unnecessary, because we don't even have unit tests, so there's nothing to mock.

I tried to explain the guy how the concept is broken, that IoC is used among other things to allow loose coupling between components, which is the opposite we have here but every time I do so, I'm told I am not flexibly and that pattern X is just like any other pattern and I just can't find any more arguments. What would you do in this case? make a demo project and try to get people see what problems IoC solves and how it should be properly implemented or just accept that this is yet another "custom" way of implementing IoC? 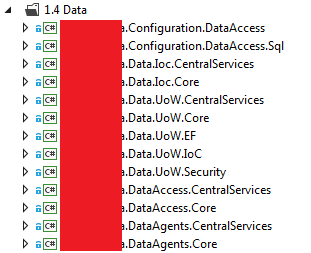 The code works though right?

Let me answer this question in terms of software design with legacy problems, as I think your 'how do I convince my boss that...' Is probably a bit off topic.

First of all limit your concerns to the bit of code that you are currently writing.

Make sure you add unit tests for it.

Then you may find that due to static methods/linking etc you have a problem which requires refactoring other components.

Do the minimum code changes required to make your code/tests work without forcing breaking changes on other components.

You then have concrete reasons why you need those changes, you avoid creating problems with 'legacy' code and you can gradually introduce new paradigms of programming to the code base.

Not the answer you're looking for? Browse other questions tagged c# inversion-of-control or ask your own question.

18
Dependency Injection/IoC container practices when writing frameworks
4
DI / IoC Abstract Factory Galore
5
Breaking the “ubiquitous language” by having an IoC Container in Domain Model?
6
What am I missing in my (mis)understanding of IoC/DI/Castle Windsor?
4
IoC as service locator
2
IoC, Unity and passing parameters (or a way to avoid doing so)
4
IoC invalidation
10
Dependency injection for a library with internal dependencies
1
Avoid core layer referencing DAL when defining repository interface