ill be using C# as the example language.

NASA is sending Rovers and Satellites to different Planets

these vehicles need a lot of logging, and to reduce clutter, would like to be able to filter these logs in the following ways:

i should be able to combine/pick one of these: 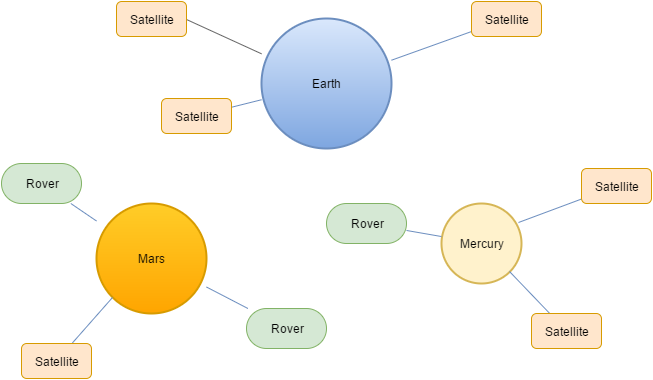 so we have 3 object types, Planet, Rover and Satellite

the usual way to add a log to objects is as such:

this would usually return a logger named "NASA.Mars" which makes it easy to simply configure the framework to log all "NASA.Mars" the same would happen with a Rover

I would get a logger named "NASA.Rover"

but how could would I know that rover is in mercury? since this is a requirement of the logging subsystem, it shouldn't exist as property on the Rover class.

if i design my classes to accept an ILog instance in the constructor I could in theory, control a child objects log name

(possible to use the parent Planet class, omitted for brevity)

My problems with this approach:

I'm looking for a good idea to solve this, without cluttering code, something generic

With the limited amount of information, I am making the assumption that planets themselves don't require logging, it's only the readings from Rovers and Satellites that do (they are the monitoring devices). In that case each Rover and Satellite should have their own instance of a logger, but perhaps log to the same log file.

By flipping your design to instead of Planets owning Rovers and Satellites, Satellites and Rovers tracking their point of origin, you could simplify this problem.

If you want to keep track of the number of satellites and rovers at each planet you can do so with Linq queries if you keep track of the collection of registered ones and filter them by what planet they are originate from.

If you must have logging behavior in your objects then yes a logger is a dependency to inject. While many logger examples you find use a service locator approach that doesn't mean it's the best.

I'm not wild about the name ".Rover" not being tied to the name of the class. I like being able to refactor class names without having to chase down strings. I've successfully used reflection and stack peeking tricks to keep the name out of hard coded strings. Just remember those tricks aren't cheap. So do them at the right time.

If your logging behavior only needs to know about class names, methods called, and the parameters passed then look into Aspect Oriented Programming. I've developed entire auditing systems that centered around a few name conventions that allowed us to remove all audit code from the objects being audited.

The heart of your problem is you need some way to know whether a rover should be logged. If rovers have no stored knowledge of where they are then they could hold this information in the form of logging settings, that is all Mars rovers could be set to log to dev/null.

The most data restrictive and cpu intensive solution is to search. When a rover reports it needs logging you'll have to search for the rover in the worlds that might contain it. If that is expensive this can easily be prohibitive.

AOP can do any of that. You just have to build what you need in a different class than Rover. Remember that Rovers have to get to Mars somehow. That somehow can be detected by AOP. Then you have to decide how to remember it.

Your specification relates to logging, so you could create a logging service implementing these rules, and inject it into your objects instead of log4net.

It should have methods with a first argument representing the object needing to log something. One specific method for each object with specific rules, plus probably one generic just to get the object type for other objects.

You can then ask log4net for a logger based on the object's type.

All objects would call logging.Log(this, ...) to avoid knowing if a specific logging rule exist.

Not the answer you're looking for? Browse other questions tagged c# design-patterns dependency-injection logging or ask your own question.

14
Rules and advice for logging?
8
Concurrency pattern of logger in multithreaded application
8
Manager/Container class vs static class methods
1
Event based logging. Is it a good idea and is it ok to pass a handle to a "logged" object?
6
Log4j logger per class vs logger per application
8
In ASP.Net Core , how does one resolve circular references?
3
Logging an application in Python
1
Logging patterns from within library code
1
Logging to database in ASP.NET Core Entity Framework Core application