(Please excuse the level of simplicity in this question, as it is very basic)

I have been working with very simple Object-Orientated Programs and learning basic concepts. For example, my programs would only have one or two objects, each being assigned to a variable.

As you can see in the above program, I have two simple variables (student1 and student2). Each variable stores an object of type TStudent.

I hope this makes sense, and I apologize for the simplicity of it. thanks.

I'd think at that point you might put them into a list or an array or whatever sort of collection. Storing in the database? Sure, if you need to... where else would the info come from? For that matter, how often would you need to have all of these objects loaded in memory at the same time?

In what scenario do you expect to "manually" load data like that? Would you expect it to come from the UI? Perhaps from a file upload? What do you need to do with it after?

Other times, you might upload a file of say, 100k people, and process them accordingly, so there's reasonable cause for dealing with a larger amount of objects as well.

Does this help put things in some perspective?

You're right, there are more advanced ways to handle multiple objects.

There are creational patterns that help with the construction part. It's a really good idea not to mix construction with behavior. Beyond the GoF creational patterns is the Joshua Bloch builder that hacks named parameters into a language that doesn't have them. This goes as far as writing iDSL's to construct your objects. You can basically write your own language to construct your objects.

As for holding a reference we can do better than a simple identifier. Array's work when you know ahead of time exactly how many there are going to be but most people skip right past them to collections that can grow in size at any time.

They come in a great many flavors. In java I've found this to be a very handy way to decide which to use: 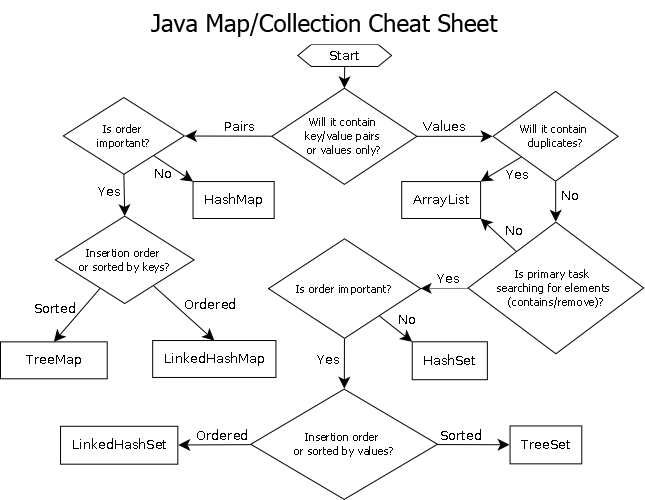 What your line didn't show is how you get the students information into the object.

This can come from many sources, DB, flat file, other objects, web forms, command line input. Because of that it's a good idea to not make it the student objects job to get this input. Far better to to have a simple Student class that's waiting for something to hand it the data. Then write some construction code for each of those cases that hands it the data.

That's called dependency injection and you can do it without any special software.

4
OOP - How to handle multiple instances of a class

7
Data classes: getters and setters or different method design
9
Keeping track of all objects of a class
1
Does lots of Instance Variables within my class suggest flawed Design?
9
How can I have objects interacting and communicating with each other without forcing a hierarchy?
24
What's the proper way to model this real-world activity that seems to need circular references in OOP?
1
Is “pass objects instead of required variables only” contradict with “avoid global variables”?
1
Is it usual to “re hydrate” DTOs into full objects with relationships when consuming web services?
3
Object Oriented vs. Procedural Processes in Embeded System