Is there an industry-standard equivalent to cURL?

A bit of background information: I'd been a Java developer for a company for about 6 years. This company used a variety of Linux-based operating systems for its day-to-day operations; all of our servers and development machines were some variant of Linux. When we were developing new web-services and wanted to discuss usage or bugs within them, it was customary for one developer to ask the other for the cURL syntax of the request in question. E.G.,

Developer A: How should I interpret the data from endpoint 'foo/bar'?

Developer B: Can you send me the cURL for what you're trying to do?

And then Developer A would attach something like this:

This served well for communicating HTTP test cases and such between engineers. In general, it perfectly describes how the HTTP request is going to come out looking.

However, about a year ago, my company was bought up by another company, and now the parent company is trying to integrate with about 10-million lines of my former company's code. But there are some problems... One problem we've had is that the company that purchased my former company is largely Windows-Only. Pretty much everything is done using Windows and Microsoft technologies, not Linux.

This leads to communication problems on a regular basis. When someone tells me that something in our linux servers "doesn't work," my first reflex is to ask for the cURL statement that represents their HTTP request. But... well, the majority of my new colleagues seem to not know what cURL is, because I guess Windows doesn't have cURL (I'm not much of a Windows guy so correct me if I'm wrong on that!).

So I'm wondering, is there a better, more-ubiquitous, cross-platform way for us to communicate HTTP requests between each other?

Is there an industry standard?

You betchya. It's the actual Http protocol. An actual Http Request looks something like this.

You could try to teach these guys cURL (and maybe they should learn if they need to work on *nix boxes), but they're likely using a GUI tool like Postman or Telerik Fiddler. These tools will provide the full request. I bet cURL will echo it back too, if you know how to ask for it. I would recommend you learn what cURL is actually sending across the wire. Not only will you all have a common language to speak, but you'll also learn a bit about the technology you're using.

I would highly recommend taking a look at Postman - while it doesn't look like they have a Linux app just yet, the Chrome app might work out for you.

They have tools built in for working with curl http://blog.getpostman.com/2016/02/03/curl-and-postman-work-wonderfully-together/

While not suitable for one-off requests, there are a number of formal ways to unambiguously document a REST API. I believe the most popular is swagger, but also there is blueprint and RAML. If you happen to work in the telecom industry, the industry standard is YANG, because we have to do everything the hard way. If you are running into this problem a lot, it's well worth the effort to go through the documentation process. I've used swagger personally. It has a nice editor to help and a helpful UI for displaying the results. Here's an example from their demo: 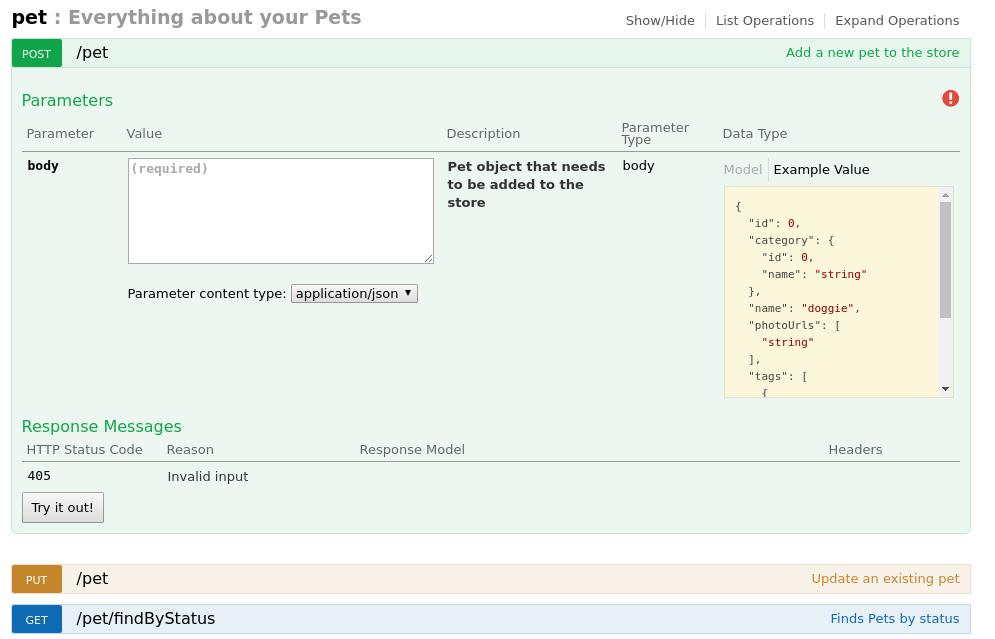 Not the answer you're looking for? Browse other questions tagged http cross-platform http-request or ask your own question.

1
HTTP events? Is there a standard / precedent for this?
9
HTTP Response Header for a unique Request ID for REST service
3
Understanding HTTP Cookies in Indy 10 for Delphi XE2
1
How should I connect to my php framework to use methods written in the framework, in a framework agnostic environment?
2
Is there a cross-platform way to open a TCP connection, send a HTTP post request and keep the connection open?
1
Design: HTTP and Websockets working together
12
What reasons are there AGAINST using only POST HTTP verb in an API?
2
How do I send data to HTML page only when a POST endpoint is hit?