Why are first class polymorphic relations not possible in relational databases? 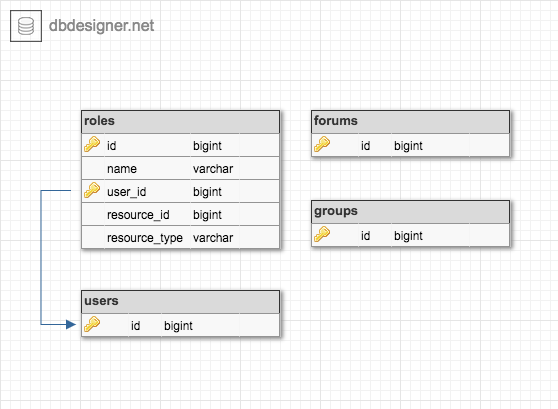 Lets say I want to setup a roles table that has a polymorphic relationship to resource.

I understand that that I could directly setup a foreign key - by adding for example a roles.forum_id column.

But why is (AFAIK) creating a compound foreign key where one column holds the key and another the table to reference not possible?

You can fake this by using a strings for keys and strings for tables (yuk!), but it will impact all of your tables and their queries rather dramatically.

All of this is part of what's known as the Object-Relational Mismatch .

Polymorphism by class is simply not a feature of the standard relational model, though some specific databases feature inheritance as an extension.

This works pretty well for some stuff, but is not perfect in at least the following:

For more information on modeling inheritance in relational db's, see:

It is perfectly possible to model polymorphic data in a relational database. E.g. a series of nullable foreign keys to each resource type table, and a constraint that exactly one is non-null.

Not the answer you're looking for? Browse other questions tagged relational-database or ask your own question.

3
Using Autoincrement Primary keys as Foreign Keys
3
When deciding a Primary Key, can I use Date part of a DateTime field
2
How to represent an optional-to-optional relationship in a database
2
Given an entity that can have a parent, or can stand on its own, what is the best way to represent it in a relational database
19
Disadvantages of using a nullable foreign key instead of creating an intersection table
2
Compromise between formal correctness and convenience in database relations
0
In a parent table - Child table relation , where to store order of children
1
Having unique identifier for user while Updating user entity (by deleting and adding new one)
1
Foreign key vs string