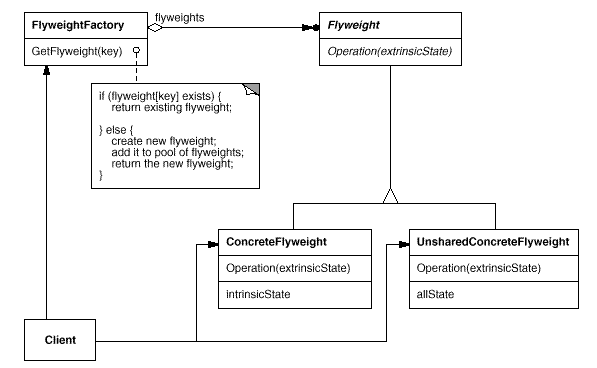 Here as much as I understand Operation takes in extrinsicState as argument, but it will not use it at all, as far as it has allState as member data.

Is it a good design? To take arguments you don't use, and if you will use, then you will have data duplication. This may even be Liskov Substitution Principle violation?

Here as much as I understand Operation takes in extrinsicState as argument, but it will not use it at all, as far as it has allState as member data.

I don't think that is the case. allState is not a replacement for extrinsicState. It is simply the unshareable state that is differentiated from the externally stored state.

The extrinsicState is the GlyphContext, which is the mapping between the glyphs and fonts, and since this state is external to the flyweights, it must be passed in to both concrete and unshared concerete flyweights.

It is conceivable that Rows and Columns could capture a reference to the extrinsic state (the GlyphContext) and then they truly would not use their parameter. However, as they mention, with this design, clients don't have to know whether they are shareable or not. (This extra state would also be contrary to the flyweight design, as even the reference is not really necessary.)

Is it a good design? To take arguments you don't use, and if you will use, then you will have data duplication. This may even be Liskov Substitution Principle violation?

The flyweight pattern is an optimization, if you will, and, you can think of it is a refactoring of a simpler object-oriented design that is using too many objects.

After the refactoring, you can now invoke all the same object-oriented methods that previously existed, but the cost is that you have to pass the extrinsic state as an additional parameter now.

As an optimization, if you don't absolutely need it you shouldn't use it just because you can. It makes the code harder to use, understand, maintain, etc..

But in computing, there are costs, and so when you need optimization, you need it!

Also note that you don't necessarily have to implement unshared concrete flyweight's, it's just that you can if you need it.

Not the answer you're looking for? Browse other questions tagged design-patterns object-oriented-design or ask your own question.

4
Sanity of design for my in-memory object representations of database rows
0
Is the flyweight pattern a good security choice for managing permissions?
0
How much to encapsulate when objects being dealt with are pretty similar
12
Parallel hierarchies - partly same, partly different
1
Design pattern for modeling a PC
1
How to model my Child Classes without violating OO Principles
3
C++ Gof Design Patterns heavily depends on new or shared_ptr
1
Create object(s) to cater for two data sets that are the same entity but one has an additional element
1
What are the main aspects to consider in the design of a customised pattern?