Say I have the following ER diagram:

Now if I represented the relationship using a foreign key of School in Student, I could have NULL values (because a Student is not required to belong to a School), for example:

So the correct way (based on what I have read) is to create an intersection table to represent the relationship, for example:

This way, no NULL values can be present in the table School_has_Student.

But what are the disadvantages of using a nullable foreign key instead of creating an intersection table?

I mistakenly chose (school_id, student_id) to be the primary key for the School_has_Student table, which made the relationship many-to-many. The correct primary key should have been student_id: 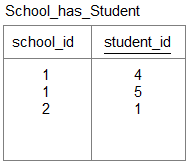 By using a join table, you are modeling a many-to-many relationship.

By using a simple foreign key, you are modeling a one-to-many relationship.

The disadvantage of a nullable foreign key is being unable to model the relationship as many-to-many, if that is what you are trying to accomplish.

Based on your edit to the question, you are effectively splitting the student table into two tables with the same key. I generally see this on tables that have way too many fields, so someone splits them into two to be more manageable (I call it putting lipstick on a pig).

By splitting the student table, you are making the second table optional because a record need not exist in the second table. Which is very similar to a field not needing to be set because it can be null.

If you want a one-to-many relationship, you are far better off using a single table and allowing the school ID to be null in the student table. There is no reason to avoid nulls in fields, even for a foreign key. That signifies that the foreign relationship is optional: developers and DBAs understand that clearly, and the underlying database engine certainly should work fine.

If you are concerned about joins, do not worry. There are well-define semantics for how joins work with null fields. By using a single table, you can join two tables instead of three.

the book "Fundamentals of Database Systems" [...] says [...] that it is recommended to use an intersection table if there are a lot of NULL values in the foreign key column (for example: if 98% of employees don't manage a department)

When there are a lot of NULL values in the foreign key column, your programs will have to deal with this mostly empty column for each and every record they process. The column will probably occupy some disk space even though in 98% of all cases its empty, querying the relationship means querying that column which gives you more network traffic, and if you are using an ORM which generates you classes from your tables, your programs will also need more space at the client side than necessary. Using an intersection table avoids this, there will be only link records necessary where the equivalent foreign key would not be NULL otherwise.

Opposed to that, if you have not just a few NULL values, lets say 50% or more relations are not NULL, using an intersection table gives you the opposite effect - more disk space, higher complexity resulting in more network traffic etc.

So using an intersection table is just a form of optimization, only sensible for a specific case, and especially nowadays, where disk space and memory became cheaper, much less frequently needed. Note that "Fundamentals of Database Systems" was originally written more than 20 years ago (I found a reference to the second edition from 1994), and I guess that recommendation was already in there at that time. Before 1994, space optimization was probably much more important than today, since mass storage was still more expensive and computers and networks were much slower than today.

As a side note to a picky comment: the above statement is just trying to anticipate what the author of "Fundamentals of Database Systems" had in mind with his recommendation, I guess he was making a rough, general statement, valid for most systems. In some databases there are other possible optimizations like "sparse columns" which make the use of an intersection table even more obsolete.

So don't get that recommendation wrong. The book does not tell you to prefer intersection tables for {0,1}:n relationships in general, or - as you wrote - that this is the "correct way". Use optimizations like this which will make your programs more complicated only when you really need them.

Conceptual model will look like this, which is very unorthodox to say the less:

Physical model will look like this, which is confusing to say the less (people will think it's M:M unless they see closely):

If you have like, many columns (FK or otherwise), that do not apply to most students, separate the tables into role tables with 1:1 rels. But that's not because they are FK, it's because the columns don't apply to most rows.

Otherwise, nullable FK are a normal part of a database and join tables are usually for M:M rels.

Common uses of 1:1 rels are for role tables having columns that apply only if the entity is of a certain type, and extracting BLOB columns for performance or storage considerations. Avoding null values in FKs is not one common usage for that.

In addition to other answers I would like to point out that a null value for the foreign key is ambiguous. Does it mean:

2) It is known whether or not the student has a school, and they have none

If you use the standard meaning of null, how would you represent "student has no school" in your foreign key model. In that case, you'd probably have to create a "no school" entry, with it's own id in the school table. (Not ideal)

Database tables have this nice thing called constraints. So it's very easy to make in intersection table that allows only 1 of each student to appear in the table but many schools in that table. Effectively giving you a

Theory is nice but in the end you are going to model your database after the questions you're asking.

If you want to question often with the question: "which students are in my school" do you really want to query the entire students table or have an easy intersection table.

In databases: optimize for the questions you ask.

There is an use case where using a third table may actually make sense. The example may seem purely hypothetical, but I hope it illustrates my point well. Let's assume you add more columns to the students table and at some point, you decide to enforce uniqueness on the records via composite index on several columns. It's very likely that you'll have to include the school_id column as well, and here things begin to get messy. Due to the way SQL was designed, inserting several identical records where school_id is NULL will be possible. It makes perfect sense from a technical perspective, but is counterintuitive and may lead to unexpected results. On the other hand, enforcing uniqueness on the intersection table is easy.

I had to model such an "optional" relationship recently, where the requirement for an uniqueness constraint was due to a timestamp column. Leaving the nullable foreign key in the table suddenly lead to the possibility of inserting records with the same timestamp (let's assume it's a default one, set on records that haven't been audited/approved yet) - and the only way out was to remove nullable column.

So as you can see, it's a fairly specific case, and as others noted, most times you'd be perfectly ok with all the NULL values. It really depends on the specific requirements of your model.

In addition to the many good suggestions already submitted, personally I'm not a fan of foreign keys unless they are truly necessary. First there is the M:M relationship that you are referencing. Plus, calling a foreign key, and thereby pulling that table data into your queries, introduces more complexity and depending on table size, slower performance. As others have said, nullable FK fields can be non-supported and can create data integrity issues.

If you are defining a state where the student school is unknown or empty, the NULL will not differentiate those conditions. (again we're back to data integrity.) The role table suggestion by Tulains is elegant and allows for null values cleanly.

Not the answer you're looking for? Browse other questions tagged database database-design relational-database or ask your own question.

2
Using Autoincrement Primary keys as Foreign Keys
2
How to represent an optional-to-optional relationship in a database
4
Is it okay to use a non-ID column for foreign key reference?
2
Given an entity that can have a parent, or can stand on its own, what is the best way to represent it in a relational database
0
How to split a table based on its child-types
1
Duplicating a key in a mapping table instead of joining
2
What's the best way to handle a “union” in a relational database?
2
Where to put the attributes of a relationship in a non many-to-many relationship?
3
When to use an associative table instead of 1 foreign key?