In the context of houses, should area be stored as square feet or square meters?

The area of the largest houses in existence are greater than 32000 sqft, so a 4-byte integer may be required to store square feet. For this reason, I'm favouring square meters at the moment.

Are there any other considerations that are not immediately obvious?

If your app will potentially be used outside the USA, Myanmar or Liberia, or will it interoperate with other systems, I'd suggest you use the more widely accepted measurement system to store the data and then convert it to whatever local mesurement system the user wants to display. Obviously the columns shouldn't be integers but real.

The metric system is widely accepted in science and enginneering for information exchange: 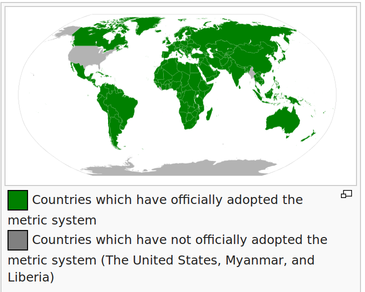 So my suggestion is that you store it in the metric system (square meters for area) and then convert appropiatelly to present it in whatever unit the user prefers (preference settings).

In the other hand, if your app will only be used in the USA, Myanmar or Liberia, store the areas in squared feet.

Square metres stored as an integer may not have enough resolution to capture what you need to know. Converting to and from square feet or metres will lose information. Use floating point values to prevent this issue.

Use whichever unit your primary users are likely to want for storage. If you are only targeting a US/UK market (where square feet is the customary measurement), store that. Most of the rest of the world prefers metric, however, so for an international market prefer square metres.

Since you are asking this question, you are probably working on a system which uses both (or a system which will be used in different countries). This means that you should be able to store distances expressed in feet or meters.

In your database, do have not one, but two columns: one for the value, the other one for the unit. This would make it straightforward to store and retrieve the measurements, without doing the conversion under the hood (which is usually not what the user wants). Double conversion is especially problematic (for instance meters to feet to meters), since rounding errors will accumulate.

Note that you will probably need to support even more units than that. In the context of houses, I imagine that meters are not very precise: rooms will rather be measured in centimeters, if not millimeters (for electrical installations, it may matter). This makes this approach much more interesting than, say, having two columns, one for feet, another one for meters; with the approach I suggested, adding units won't lead to any schema change.

If you need to either sort the data (for instance larger houses appear first) or filter it (for example get only the houses larger than one hundred square meters), this is not enough: you would need a third column which contains a value converted to a common unit. It doesn't matter which unit exactly is used here, since those values will only be used for ordering and filtering.

That's the wrong way to tackle the problem. The question to ask is: what unit will be used elsewhere? Is it one unit only, or are different units possible (don't forget tatami). If only one unit will be used, then use exactly that. If different units may be used, decide for one, and make sure that a value will always be entered together with the unit in the UI, and gets converted to the unit you choose.

The reason you give for using a different unit is completely the wrong thing to be concerned with. A 32 bit number can hold values much larger than that and even if that were the case, no one cares about optimizing on space in 2016.

The main decision point here will depend on what the values are used for. If you just need to store and display then do as @ArseniMourzenko suggests and keep a units column. If you need to do calculations on these values, it's going to depend on the specs for your calculations. If you were doing physics, use SI units, no contest. However if your app is used to calculate board-feet for flooring or how many studs are required to build the frame, you should problably stick with feet. Even in Canada where the metric system is used, building codes are still (at least in part) specified in feet.

Not the answer you're looking for? Browse other questions tagged database measurement or ask your own question.