How to determine the optimal release frequency for maximum throughput?

I work on a large software programme - 100 developers in financial services.

The common wisdom of Continuous Integration is to get feedback early from your changes.

A business value diagram in Lean allows us to see the flow of business value from left to right (similar to a production line) and from this you can identify where your change items are getting stuck, and where the bottlenecks in the process are.

The challenge in software development is identifying precisely what the widgets on the production line are.

We know that the economics of batch size is a u-curve optimisation problem, and that the transaction cost of a regression test and release is substantial.

My question is: How can I determine the optimal release frequency for maximum throughput?

I've been thinking about this also and to do this, I think you first need a hypothesis. Here's where I would start:

You are bound by the minimum time to regression test. I'm going to assert that you can't release faster than that. I think a basic formula for this would be based on the following components:

Time to regression grow over time as you add features but the marginal rate of increase will diminish over time. Your situation may vary but I think we can assume this is fixed. If it's growing significantly, having releases on any fixed frequency will not be sustainable.

Defects and Time to Fix

In order to determine whether either of these match reality, I think you need to determine/guess the bare minimum time to regression test everything. You can't go faster than that. Then you need to try different release schedules. This might require some spikes. Then you start trying to decompose regression time for the number of features. You might see something like this: 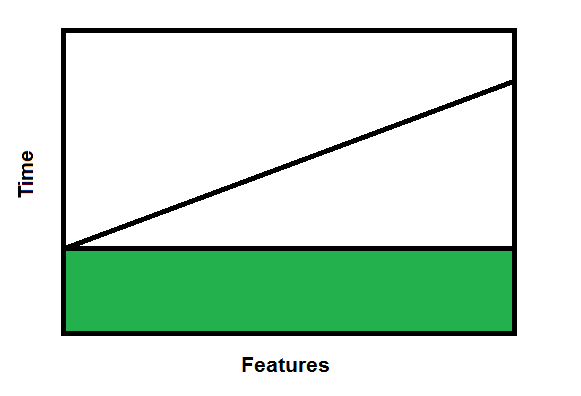 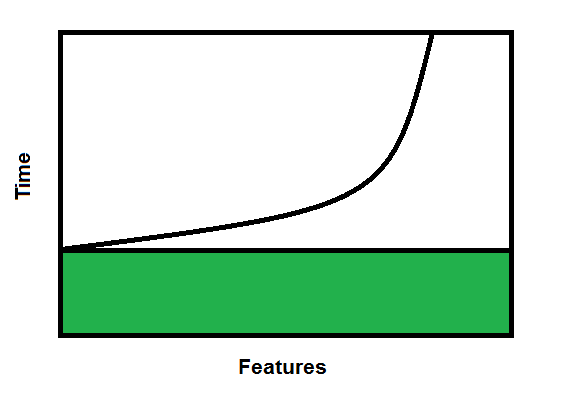 Where the green is your regression baseline time. Or maybe it looks like something completely different. Based on my experience it's more like the latter.

If it's the former, it would suggest that you should go with really long release cycles because that minimizes overhead of the baseline regression. However there's another factor that you haven't mentioned: business value. If a feature produces value for the company (and why are you doing it if it doesn't) the longer it takes to put it into production the less value is adds. So even if it is a straight-line cost, you need to consider that.

Once you understand this relationship, then I think you will most likely want to make the dev time for a set of features match the QA time for those feautres (considering other overhead activities like fixing defects, updating tests, sharpening the saw, etc.)

Not the answer you're looking for? Browse other questions tagged lean devops or ask your own question.

3
How do you validate need for documentation?
8
What is the value proposition of “build, release, run”?
18
DevOps means developers now take responsibility for infrastructure and release - but what are the drivers behind this change?
3
How to define the .deb-packages name to reflect the Git branch
7
What is the method to identify bottlenecks in a software engineering programme?
3
How to financially quantify optimal number of items in a release?
4
How to architect a codebase for short-term contributors?