I'm not quite sure of the proper flowchart notation for returning an object/value from a function (I'm also looking for some quick tips on proper flowcharting notation in general, if anyone notices any glaring issues). 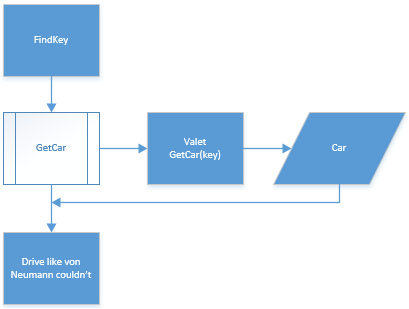 Flowcharts represent flow of control, not flow of information. Flowcharting formally captures steps and the linkages between them that describe the transfer of the flow of control that are often based on decisions: in particular, conditional branches and loops.

Flow of control is about what is done or happens next, and (sadly) not about the required data to perform that step.

According to Wikipedia, there are some extensions for the flow of data; however, they are basically limited to documents and files.

Generally speaking, state is poorly represented in flowcharting; there is virtually no notion of data, variables, scopes, lifetimes, or types. So, data (and metadata about that data, such as allowed or expected types) is mostly documented informally with human language description in the text within individual steps of the flowchart.

Input & Output in flowcharting is meant to indicate communication with another independent and top-level process (even if it is just a later running copy of one's self). As such this communication is about reading/writing to disc or to a network.

A getter does not qualify as input or output, which is to say communication with another independent process, so I think that is out. I don't think they even had getter's when flowcharting was first applied to software design (circa 1950).

4
Representing a user event in a flow chart

4
Support / Maintenance documentation for development team
12
Flowcharting and Method Calls
15
How can Scrum be adapted to an academic environment?
6
How to properly document functionality in an agile project?
1
Are there any standards for flowchart data structures?
3
Documenting dynamic constraints in API data