How to detect thin extrusions from a polygon?

I want to create a minimal polygon which approximates the boundary of an arbitrary (semi-random) shape.

By "minimal" I mean, "as few points as possible".

The original shape (to be bounded) is in bitmap format, with simple coloring.

The complication is that the shape may have lines (i.e. long thin areas/shapes) coming out of it. What algorithm can you suggest I use for detecting these lines?

For example, I want to detect lines which are no more than five pixels wide; the lines might be on a diagonal, or curved.

I'd prefer an algorithm, which I can implement, rather than a pre-implemented third-party tool or library.

Note that it has a semi-random line coming out of it.

Here's the result of the shape-processing that I've implemented so far:

An expanded version to make each pixel more visible: 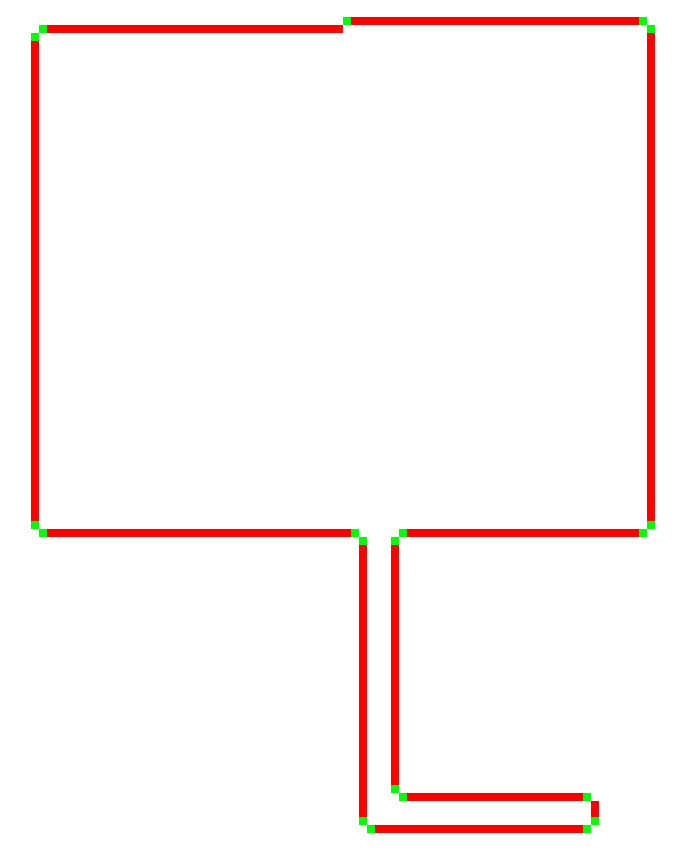 The green pixels represent the polygon that I want, except that I'd like to cut off the tail shape at the bottom (so that basically just a square remains), because its maximum width makes it too thin to be interesting.

Given this data, what algorithm would detect that there's a thin shape coming out of the bottom?

Re. the performance requirements, the bitmap is likely to be say 1000 pixels square; the bounding polygon might have a couple of hundred points in total; and the algorithm is being run on a PC.

How about this general approach? (Assuming your starting-point is the black outline as shown)

Create a mask by:

The most straightforward algorithm is probably comparing the distances between the points in the figure. Those that are close can be merged, deleting intermediate vectors.

However, you do run the risk of deleting a whole figure, which you might want to keep, as a separate object. In this case, keep the "thin sticks" as a separate figure, and measure the maximum width at each pixel row to determine if you want to keep it. You might say that if either the width or height is below a minimum, discard the figure.

2
How to detect two moving shapes overlapped?
1
How to manually detect deadlocks
1
Drawing a biggest possible circle inside a polygon - JSXGRAPH
2
Selecting a point inside a non-convex polygon
2
How to find out if a tile is being covered by a polygon?
0
How can I map a number of points of a polygon to matching points of a larger rectangle?
2
Which algorithm to find the shortest (nodes count) path that encompasses all polygons inside a larger polygon?
8
Generate equally sized areas in polygon
3
How to guess which pieces of text belong to which lines in a scanned document?