Why running threaded algorithms with exact number of cores the machine has, is faster than anything else?

I made some basic multi-threading tests here, and noticed that the speed increase when using the exact is bigger than I expected.

I assumed that speed would increase linearly until I hit the limit of cores, and then either stop increasing, or even slow down.

Instead speed increases linearly, and then JUMPS upward, but on the next amount of thread (1+ than the machine have cores), it "continues" from where it was before.

A graph for example looked like a long linear function, with a gigantic spike in the middle, where I had same number of threads as cores.

PS: before someone point out the obvious (that using the number of cores of the CPU mean using the maximum of the CPU), I already know the obvious, I am asking about the non-obvious.

EDIT: graph made in R, it is how many "turns" the simulator can run per MS. 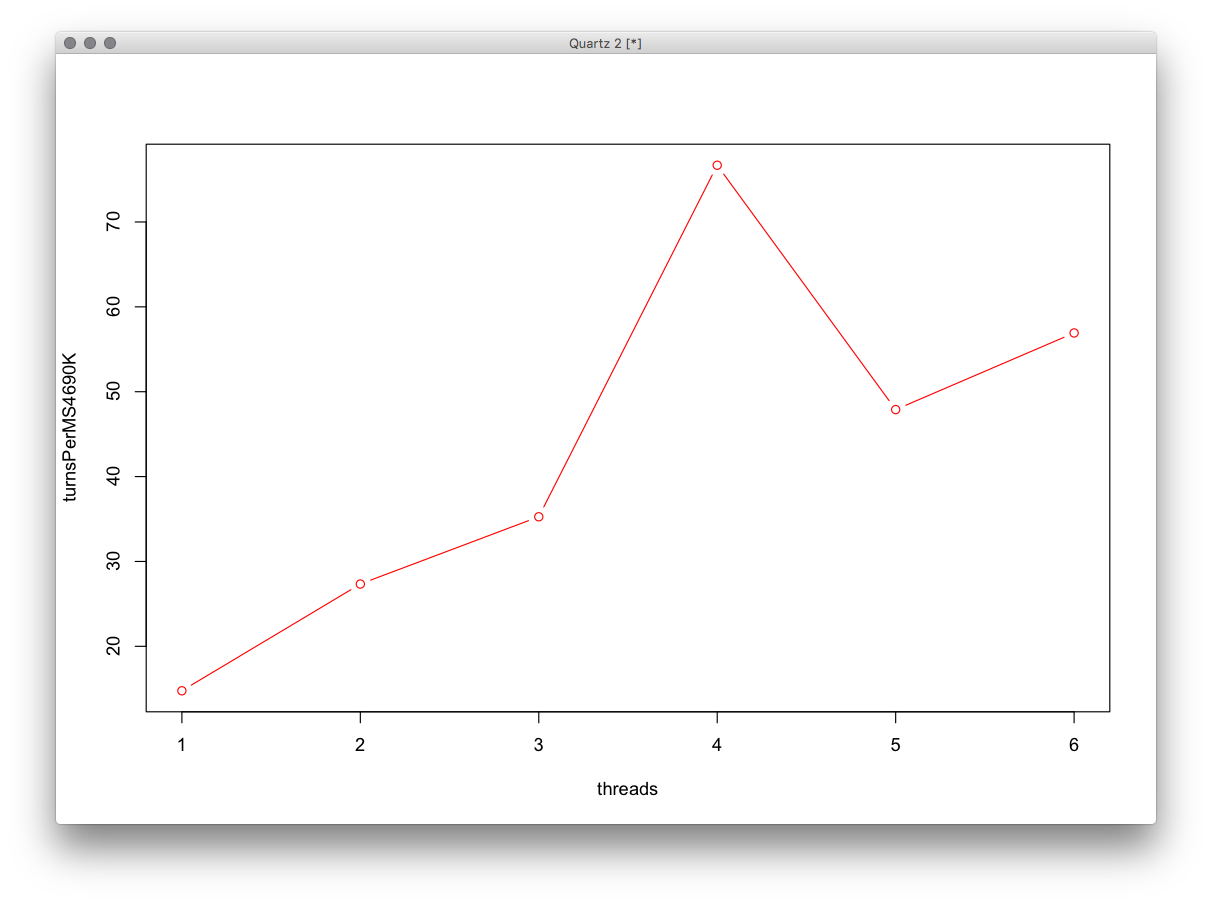 Same program, but with "release" build.

Also, I would like to note that "threads" here refer to worker threads, there is also an UI+Boss thread that updates as fast as OpenGL allows, seemly this became important on the MacMini, since the graph looks like "off by one" 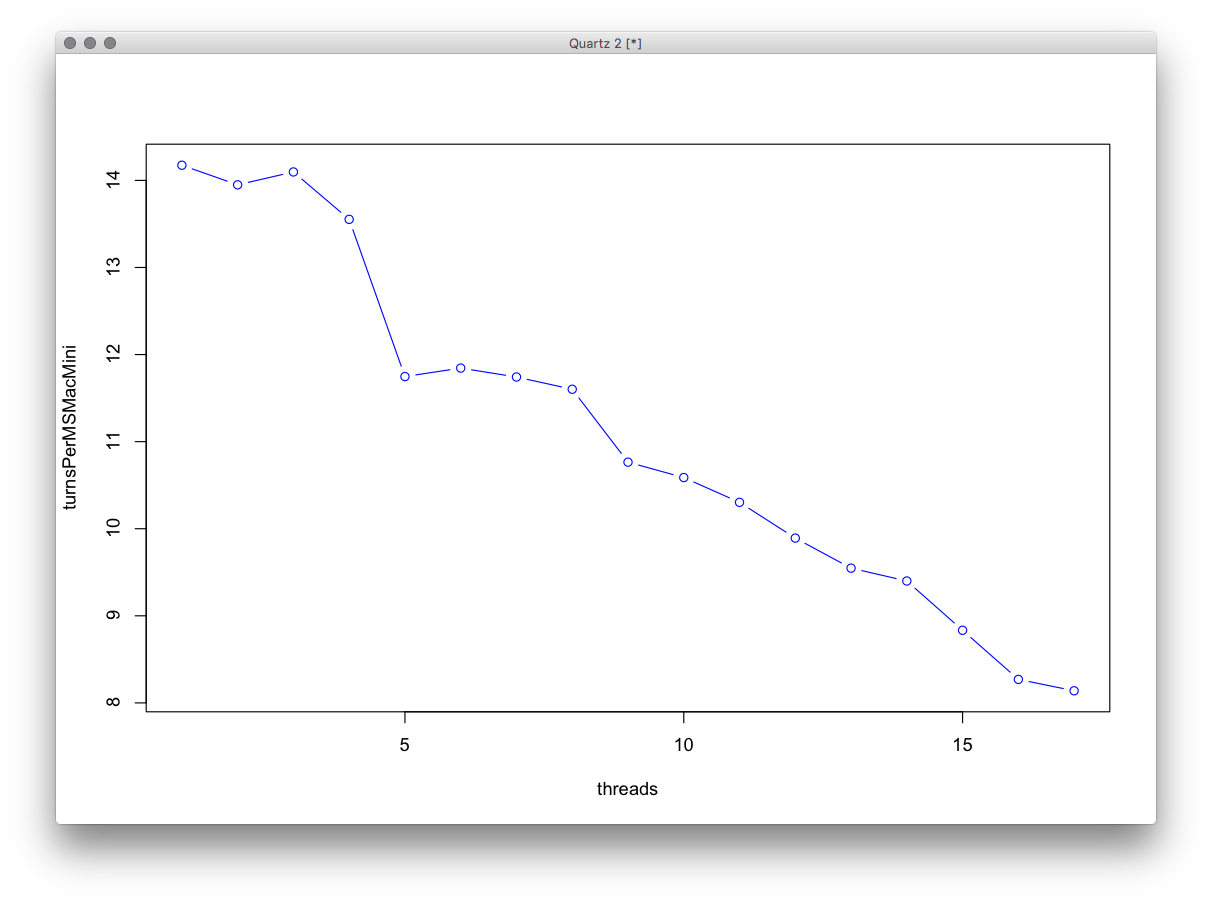 Here is Zephyr's performance + MacMini on the bottom of the graph, its CPU is a i5-4690K with Intel's stock behaviour, it has 4 cores, but doesn't have HT. 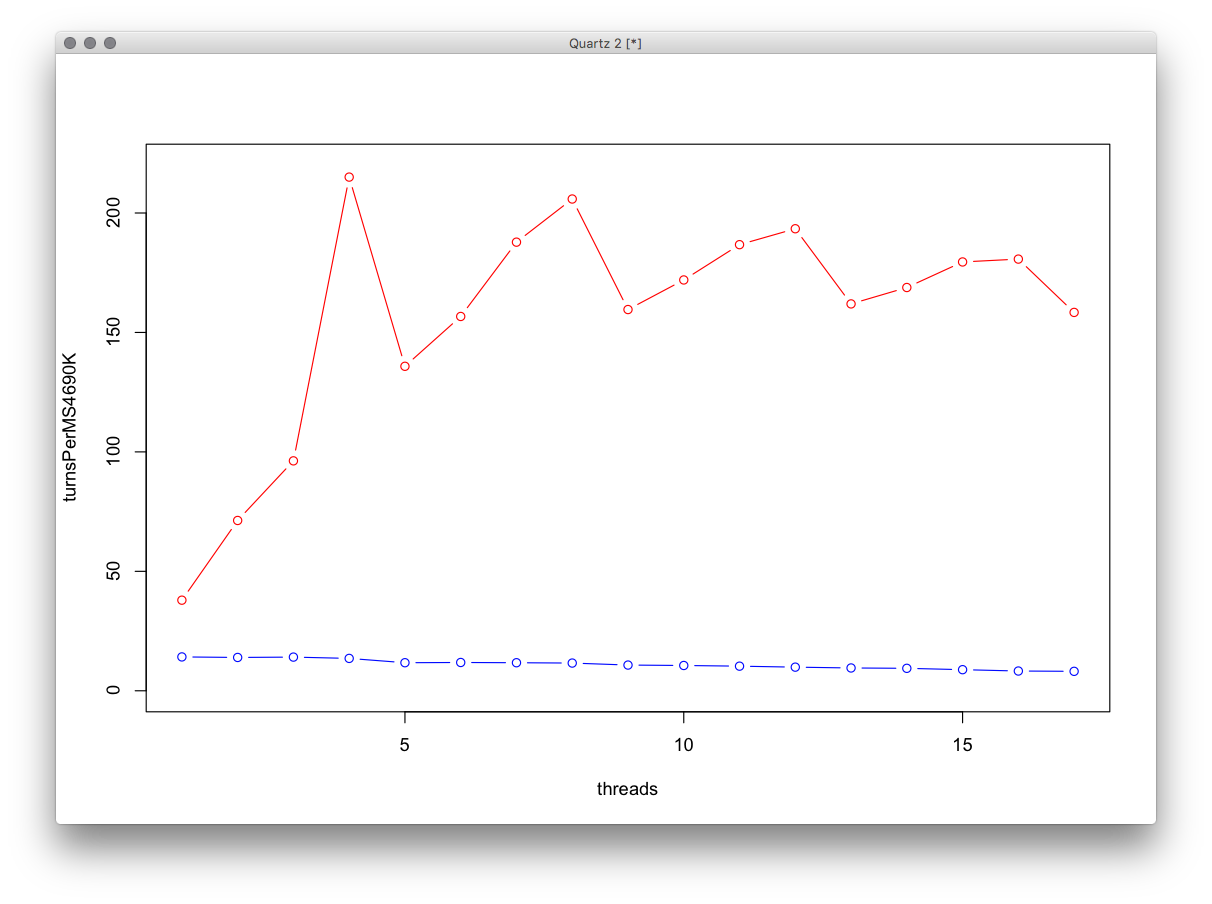 Some of the many things that may or may not be relevant include:

Interesting case. If you had no dependencies on other threads, you would get a peak at the number of cpu's (or double with Hyper Threading) and then a slight decrease due to excessive context switching.

The large jump aspect is a mystery for now, you may be hitting a "resonation point" where callback requests and context switching occur in an optimal sequence or frequency, but since the same is reproducible on other hardware that remains a bit mysterious.

The other aspect however, increasing performance after the number of CPU's, can have many known causes. It is due to how your worker threads lock common resources (for example how they interact with the main thread).

If you have a thread-pool that gets work assigned by the main thread, then you are probably not really utilizing the given number of threads all the time since your main thread may be busy while some workers are waiting for new work.

Try to implement it this way, where the main thread (or another thread) first prepares chunks of work and stuffs them into a queue. Then let your worker threads loop around picking up a chunk, processing it and dropping it into another queue that your main thread (or another thread) will process. That way the worker threads will never have to wait on your main thread. Check out my blog-post "Fully utilise all bottlenecks" where I elaborate on this idea (with an open source C# example).

If you are updating the UI after each result comes in, then that will certainly be a bottleneck (especially the OpenGL stuff). See my answer to the question "Why is my C# program faster in a profiler?" Using a timer to render a frame of the current status would in that case increase your performance dramatically. I don't think this applies to your case though, since you do see an increase with more threads.

No exact answer is possible without knowing the implementation, but I hope I'm poking you into the right direction :-)

The amount of time a task takes is the maximum amount that it takes each core to do its work. With 4 threads each thread does 1/4 of the work and each core has 1 thread, so each core has the same amount of work. With 5 threads then each thread does 1/5 of the work but one core must handle 2 threads, taking 2/5 of the time, which is greater than 1/4. More generally, the cores do equal work when the number of threads is a multiple of 4, which the graph reflects.

Note that context switching for CPU-bound tasks has very little effect on performance until you reach a huge (likely thousands) number of threads. That is certainly not your problem with such small numbers of threads.

9
Should multi-threading be used for tasks which does not involve IO operation?
3
Would this be a proper use of threading?
5
How many threads should I use in my NIO server?
3
Why does Node not support several event loops in one Process?
1
«Heavy» object initialization: within each thread or outside and then pass it to the threads as parameter?
4
Parallel Image Processing Best Practices
3
Make multithreaded program asynchronous
2
Comparison of build times on various hardware; why non-linear results?
4
Would it be possible to abstract multi-threading ability for programs not originaly designed for such?