Please take a look at this AI system architecture proposal: 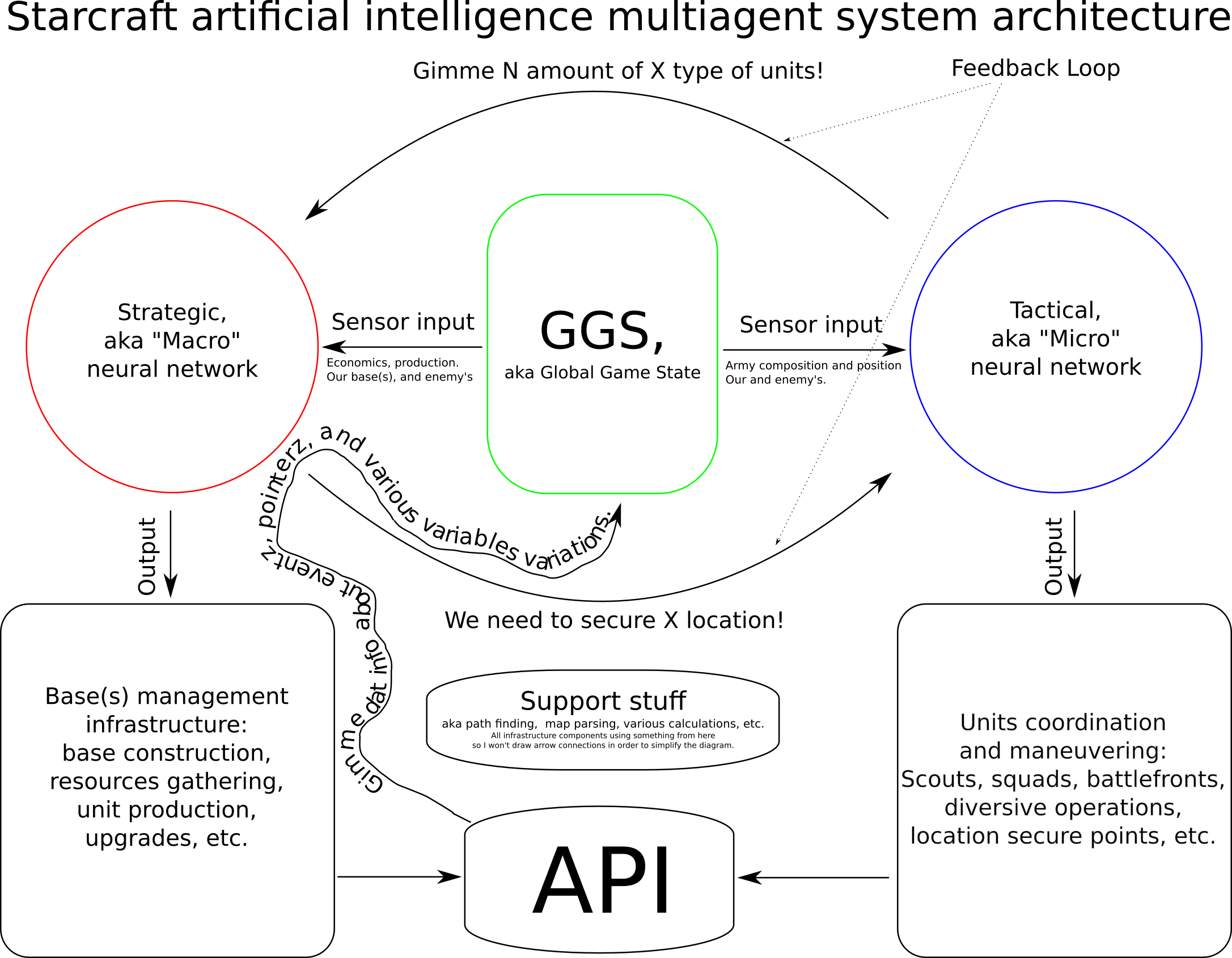 As you can see this is a multi-agent AI system for starcraft brood war that utilizes BWAPI AI framework, and I proposed this idea for the bot infrastructure architecture which consists of two primary neural networks where each one of these placed at specific task of management.

So here is the question for you guys: does that type of an architecture makes any sense? Is it helpful to split decision making on two specific fields?

If yes, how can I create the feedback loop for these two neural networks, in order to them to work effectively together.

This is a very interesting project that you undertake. But it will also be very challenging

You have started to design a multi-agent system, with two active agents: the strategic agent and the tactical agent.

Both feed the game control API on their own with commands. There is a "feedback loop" where agents send an input to the other.

Intuitively, I think that a coordination agent is missing, to prioritize the commands given to the game, like a player would do.

What is also missing is the coordination in the plans. For example, what if your tactical agents want a couple of units to perform some action, but your strategic agent determines that you'll loose the game before the units are ready ? Multi-agent planning might require more agents than the two you've foreseen.

The advantage of a multi-agent system, is that you can add additional agents, once you've implemented a communication mechanism. Each agent can have its own paradigm, so that you could mix neural net, rule based, alpha-beta pruning, and others to contribute to the plan or its assessment.

There is no magic in neural nets: you need to train them via a learning loop. In experimental systems, it is easy for simple task such as recognizing a configuration and trigger an action. Or choose between several action depending on an input pattern. Its however less easy for a multistep plan: first there is no timing in the output chain. And then you may find out if a tactic was good only after several rounds and several moves. If it fails you wouldn't know if all the moves were bad, or only one (and which one ?). So how to positively or negatively reinforce the moves taken ?

So maybe take the opportunity of multi-agent, to combine the neural net ability to recognize patterns with other techniques.

Not the answer you're looking for? Browse other questions tagged architecture artificial-intelligence neural-networks or ask your own question.