How to apply the Interface Segregation principle in C? 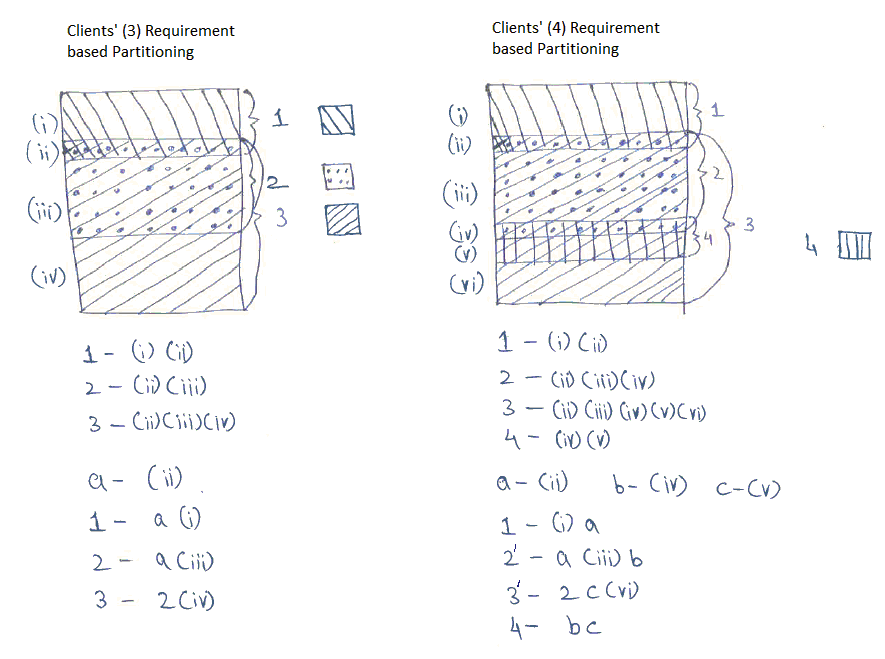 However, this violates some of the aforementioned requirements i.e. R3 and R5. Requirement 3 is violated because this partitioning depends on the nature of clients; also on the addition of a new client this partitioning changes and violates requirement 5. As can be seen in the right-side of the above image, with the addition of a new client the module's namespace is now divided into 7 header files - 'a', 'b', 'c', '1', '2*', '3*' and '4'. The header files meant for 2 of the older clients changes, thereby triggering their rebuild.

Is there a way to achieve Interface Segregation in C in a non-contrived manner?
If yes, how would you deal with the above example?

Interface Segregation, in general, should not be based on client requirements. You should change the whole approach to achieve it. I would say, modularize the interface by grouping the features into coherent groups. That is grouping is based on the coherence of features themselves, not the client requirements. In that case, you will have a set of interfaces, I1, I2, ... etc. Client C1 may use I2 alone. Client C2 may use I1 and I5 etc. Note that, if a client uses more than one Ii, is not a problem. If you have decomposed the interface into coherent modules, that is where the heart of the matter is.

Again, ISP is not client-based. It is about decomposing interface into smaller modules. If it this is done properly, it will also ensure that clients are exposed to as few features as they need.

With this approach, your clients can increase to any number but you M is unaffected. Each client will use one or some combination of the interfaces based on their need. Will there be cases that a client, C, need to include say I1 and I3, but not use all the features of these interfaces? Yes, that is not a problem. It just uses the least number of interfaces.

No client should be forced to depend on methods it does not use. ISP splits interfaces that are very large into smaller and more specific ones so that clients will only have to know about the methods that are of interest to them.

There are a few unanswered questions here. One is:

Currently I deal with this by dividing the module's namespace depending on the requirements of its clients.

ISP is a way to isolate clients from the impact of changes to the service. It was intended to make the build go faster as you make changes. Sure it has other benefits, like not breaking clients, but that was the main point. If I'm changing the services count() function signature it's nice if clients that don't use count() don't need to be edited and recompiled.

This is WHY I care about the Interface Segregation Principle. It's not something I take on faith as important. It solves a real problem.

So the way it should be applied should solve a problem for you. There is no brain dead rote way to apply ISP that can't be defeated with just the right example of a needed change. You are supposed to look at how the system is changing and make choices that will let things quiet down. Let's explore the options.

First ask yourself: is making changes to the service interface difficult right now? If not, go outside and play until you calm down. This isn't an intellectual exercise. Please be sure the cure isn't worse than the disease.

So it turns out they can get very small indeed.

I've taken this question as a challenge to apply ISP in the most extreme cases. But bear in mind that extremes are best avoided. In a well thought out design that applies other SOLID principles these issues usually don't occur or matter, nearly as much.

Another unanswered question is:

Who owns these interfaces?

Over and over I see interfaces designed with what I call a "library" mentality. We all have been guilty of monkey-see-monkey-do coding where you're just doing something because that's how you saw it done. We are guilty of the same thing with interfaces.

When I look at an interface designed for a class in a library I used to think: oh, these guys are pros. This must be the right way to do an interface. What I was failing to understand is that a library boundary has it's own needs and issues. For one thing, a library is completely ignorant of the design of it's clients. Not every boundary is the same. And sometimes even the same boundary has different ways to cross it.

Here are two simple ways to look at interface design: 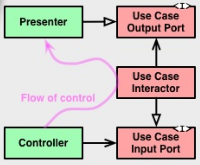 Who owns the interfaces here? The clients? The services?

A client is something that uses.

A service is something that is used.

Interactor happens to be both.

The second one is not fine because the red layer isn't supposed to know about the green layer. So is ISP wrong? Well kinda. No principle is absolute. This is a case where the goofs who like the interface to show everything the service can do turn out to be right.

At least, they're right if the Interactor doesn't do anything other than this use case needs. If the Interactor does things for other use cases there is no reason this Input Port <I> has to know about them. Not sure why Interactor can't just focus on one Use Case so this is a non issue, but stuff happens.

But the input port <I> interface simply can't slave itself to the Controller client and have this be a true plugin. This is a 'library' boundary. A completely different programming shop could be writing the green layer years after the red layer has been published.

If you're crossing a 'library' boundary and you feel the need to apply ISP even though you don't own the interface on the other side you're going to have to find a way to narrow the interface without changing it.

I do know you're looking for a simple guiding principle. ISP tries to be that. But it leaves a lot unsaid. I believe in it. Yes, please don't force clients to depend on methods that they don't use, without a good reason!

If you have a good reason, such as your designing something to accept plugins, then be aware of the problems not following ISP causes (it's hard to change without breaking clients), and ways to mitigate them (keep Interactor or at least Input Port <I> focused on one stable use case).

Gives up that you are violating another important principle which is YAGNI. I would care about it when I have hundreds of clients. Thinking about something up front and then it will turn out that you don't have any additional clients for this code beats the purpose.

Why is your code not using DI, dependency inversion, nothing, nothing in your library should be depending on your client nature.

Eventually it looks like you need additional layer under your code to serve needs for overlapping stuff (DI so your front facing code depends only on this additional layer, and your clients depend only on your front facing interface) this way you beat the DRY.
This you would od it for real. So you make same stuff that you use in yor module layer below another module. This way having layer below you achieve:

for any client only the data and APIs that it requires is visible; rest of the module's namespace is hidden from the client i.e. adhere to Interface Segregation principle.

a declaration is not repeated in multiple header files i.e. not violate DRY. module M doesn't have any dependencies on its clients.

a client is unaffected by the changes made in parts of the module M that is not used by it.

existent clients are unaffected by the addition (or deletion) of more clients.

The same information as provided in declaration is always repeated in the definition. It's just the way this language works. Also, repeating a declaration in multiple header files does not violate DRY. It's a rather commonly used technique (in the standard library at least).

Repeating the documentation or the implementation would violate DRY.

I wouldn't bother myself with this unless the client code isn't written by me.

I disclaim my confusion. However your practical example draws a solution in my head. If I can put into my own words: all partitions in module M have a many to many exclusive relationship with any and all clients.

In the M.c file, you would not actually have to use the #ifdefs because what you put in the .c file does not effect the client files so long as the functions the client files use are defined.

Again, I'm not sure if this is what you're asking. So take it with a grain of salt.

Not the answer you're looking for? Browse other questions tagged c interfaces solid or ask your own question.