Can someone explain the technicalities of MapReduce in layman's terms?

When people talk about MapReduce you think about Google and Hadoop. But what is MapReduce itself? How does it work? I came across this blog post that tries to explain just MapReduce without Hadoop, but I still have some questions.

But what is MapReduce itself?

I think it's best to start from the basics:

How does it work?

That depends on the implementation. It could happen entirely in memory (for example, the Java8 Stream framework). Or it could be distributed, as in the case of Hadoop. I'll assume that you mean the latter.

The basic idea of Hadoop is that it breaks the input (nominally a group of files) into a sequence of sequences, which then be processed by a parallel map operation. There are a couple of differences, however, between Hadoop and the map-reduce operations I described above:

So, here's (roughly) how Hadoop processes the WordCount example program

Can the grouping phase also be done in parallel or only the map and reduce phases?

No, because the Hadoop reducer processes a sequence of values, and you need to know all of the values before you call the reducer.

Except ... Hadoop also lets you define a "combiner", which is like a reduce step that can take incomplete results, and produce something that is then passed to the actual reduce step. The WordCount example does this: it takes a key (word) and sequence of values (counts) and sums them.

The combiner is useful to reduce the space required for intermediate results, but eventually you still need to know that all results are available. But before calling the final reduce stage you need to know that you've put all of the results for a given key in the same place.

Is the main purpose of MapReduce really just parallelization when indexing large amounts of data?

I would rephrase that as "the main purpose of frameworks such as Hadoop is to simplify the distribution and coordination of parallel operations on large amounts of data."

For example, let's say that you've scanned all 18 million books in the Harvard library system. Now you have a lot of images, and you want to use OCR to translate them to text. You could manually partition the files amongst a set of machines, and manually start the OCR tasks on each of those machines. And inevitably, you'd find that some machines finish the task before others. Or maybe one of the machines has a hardware failure, and you have to figure out what it's completed and redistribute the things that it hasn't.

Or you could use a framework that distributes the files to machines that have capacity (a distributed map, no reduce). But then, if you want, you could also automatically generate a keyword index for all of those translated files (another map along with a reduce).

MapReduce actually has a grouping phase. The map phase essentially consists in transforming inputs into pairs of (key,value) elements. Because the reduce phase consists in "aggregating" all the values associated to the same key, you cannot avoid the need to group all values by key before the reduce phase. This may need a lot of time since values must be shuffled over the cluster.

The grouping phase can be made in parallel. Basically, a cluster node is associated to each generated key. Then, all the generated pairs of (key, value) are sent to the node associated to their key. This typically leads to an important network overload, and this phase is considered as network bounded.

The indexing of Web pages by keyword is a typical application of MapReduce. More generally, dictionary reversing can almost directly be described as a MapReduce task. You can see it as a process for building a basic search engine: you want to find Web sites containing à particular keyword. Because you don't have time to browse all the sites for each incoming query, you have to prepare a reverse dictionary of (keyword, websites).

I don't think you can correctly use Hadoop (directly) without mastering its basis. You cannot correctly describe a map or a reduce task if you don't understand how the framework will use it for processing submitted data. A deeper understanding of the MapReduce mechanism also helps to understand why a job takes so long, or why adding CPUs will not help to reduce processing time.

MapReduce allows you to create a program that will run on a distributed data center.

This works best with data processing where the first part results is small. For example, a select account, count(*) can be run in each node to produce a partial result that is small and is sent to a server for consolidation which is the sum of sums. More or less like that: 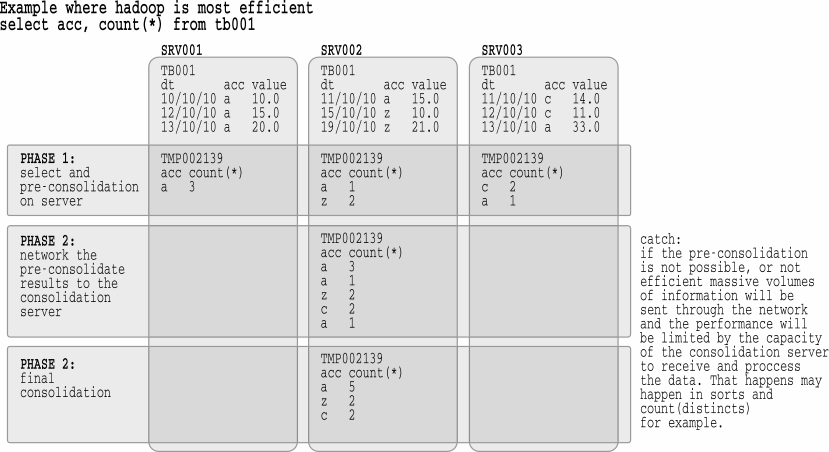 Although hadoop will work for things that are not easily partitionable, it will not be as efficient. Take the gray sort competition. Hadoop is fast to sort, but requires a lot more hardware than its competitors.

Hadoop will be effient for direct sums, select without joins and a lot of data analytics. Hadoop will not be as efficient for sorts, count(distinct), joins and etc. Matemathically speaking, it works best when the distributive property of mathematics work.

MapReduce is a divide-and-conquer strategy, with some constraints on the division and aggregation policy.

All MapReduce problems must be divisible, such that each sub-portion of the problem is uniform, or "the same". This permits any worker to work on a sub-chunk of the problem.

All MapReduce results must share the same "type" or record structure. Thus you can produce results like

where a, b, c are compatible data types, but you cannot produce outputs like

A function must be declared that can aggregate two sets of results.

such that all fields in R1 and R2 are sensibly combined in the output record set R3. This function must be symmetric, meaning

is true for all sets of records. (or you'll never get stable output across runs)

These constraints permit a multi-stage processing where many of the stages are done in parallel.

Since each "problem solver" has their "bit" of input, and they can work on producing their "output chunk" without all of the input, which make it easy to spread the work across multiple machines on the network. Each "combining" worker would then aggregate the results of the "problem solvers" until all chunks of work were aggregated.

Not the answer you're looking for? Browse other questions tagged java big-data indexing hadoop spark or ask your own question.

1
when to, and benefits, of replacing existing message passing with JMS in project?
11
Any tools/suggestions on how to refute code coverage quality argument
4
When is it worthwhile to replace working mature code with frameworks+patterns
0
How can I explain the A a = new B();?
37
Can someone explain in simple terms what is the disruptor pattern?
1
Is this Big Data architecture good enough to handle many requests per second?
6
How do I efficiently read random lines from a TXT or CSV file?