As of my knowledge, in file-level virtualization compute systems are not allocated partitions and just deals with the storage systems APIs to retrieve or upload a file.

is that correct and can block have different meaning ?

N.B : I am not sure if software engineering is the place to ask, if not just tell me and I will remove it.

You have it basically correct.

File level virtualization is basically just a server that supports file sharing. It'll typically attempt to support a number of different protocols, such as SMB (aka CIFS -- originated on Windows), NFS (originated on Solaris), AFS (Appletalk File Protocol), possibly RFS, and possibly a few others.

Typically, those interfaces access a common pool of files, so one client might access a file via SMB, and another the same file via NFS, and so on. 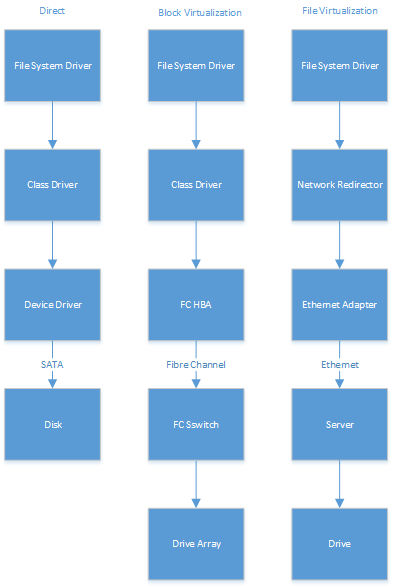 Of course, those aren't the only way things can be done. For example, in the block virtualization stack, you could have an iSCSI initiator, in which case you'd typically have Ethernet in place of what's shown above as FibreChannel.

The important difference, however, is fairly simple: with file level virtualization, the server/NAS typically tries to supply a number of file sharing protocols, in the hope the every client you care about will understand at least one of them. Likewise, most clients try to support many protocols, in the hope that you'll be able to connect to every server you care about.

In the case of block-level virtualization, there's (at least theoretically) just one set of commands that essentially all operating systems know how to use, so the server mostly just supports that one set. The catch is that SCSI commands have been around for many generations, and many subsets have been defined. So, even though they're theoretically just dealing with one set of commands, lots of variation is possible.

At the same time, you really only need a fairly small number of commands to store and retrieve files on a block device (virtual or otherwise). Lots of the more advanced commands are for things like migrating data transparently, doing backups with minimal client intervention, and so on. They add a lot of useful capabilities, but aren't strictly necessary for the simple task of letting clients store files on a disk array.

Not the answer you're looking for? Browse other questions tagged cloud-computing virtualization or ask your own question.

4
SaaS maturity level 2, how i can build configurable SaaS?(Technics and patterns)
3
What is the best and most cost affordable solution for storing user uploaded videos and pictures?
2
What's the key innovation in the realization of the "cloud?"
1
What does the term Virtualization encompass?
1
Paravirtualization and process virtualization: with or without hardware support?
8
To show the difference between system VMs and JVMs
3
What is the difference between the terms 'Virtual' and 'Logical'?