What specific category / type of machine learning can be used to make better AI decisions in this board game?

I'm collaborating with a friend to, as a challenge, create a bot that can beat the best human players at a browser-based card / board game called Duelyst. It looks like this: 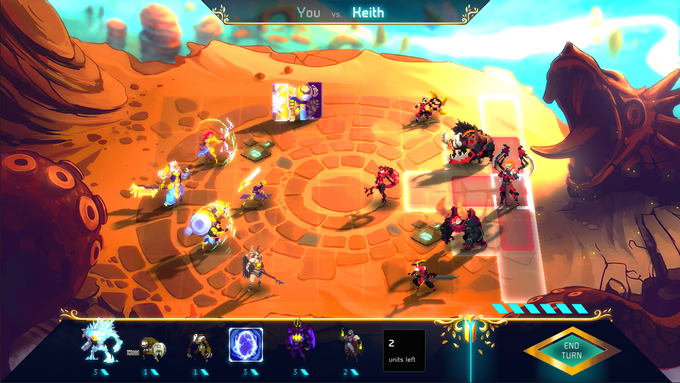 The thing is, neither of us know enough about machine learning to know what kind (it's clear there are many different categories / types) we should look into.

Of the items in the list of General Purpose JS Machine Learning libraries there are:

Now obviously my first order of business was to start browsing these different projects and look up a lot of the terminology on Wikipedia but I quickly realized this was such a broad and diverse subject, I would do better to ask an expert to point in the right general direction. The decision making in the game basically involves using one of the few cards you currently have access to (and predicting what cards you have left in your deck which you may gain access to in the near future) and playing them at the right time, moving the minions summoned by the cards around on the field to protect your general and defeat the enemy general.

We already have a fairly good AI developed for playing the game, and I now want to utilize machine learning to predict the opponent's moves and improve the bot's decision making in order to get better at the game with experience.

Which category / categories of machine learning are relevant to the task of improving the decisions of an AI playing a turn based, card / board game such as the one described?

Reinforcement learning is an area of machine learning inspired by behaviorist psychology, concerned with how software agents ought to take actions in an environment so as to maximize some notion of cumulative reward.

RL examples frequently involve games; often these models formalize a player's opponent as part of the environment. (Others study all actors, and involve game theory.) Often, the "reward" is related to winning or losing.

It's a very broad, deep field touching concepts in many other areas. E.g. recent advances include applications of deep learning.

and since you can't always use game tree in a pure way (not enough resources in the universe), also about heuristics (https://en.wikipedia.org/wiki/Heuristic_%28computer_science%29).

and regardles of links, wikipedia is a place to start, not to learn. so some book (i learnt about it from "land of lisp - learn to program in lisp, one game at a time") is a must.

Not the answer you're looking for? Browse other questions tagged machine-learning or ask your own question.