what is better way to architecture project

I am pretty new to angular.js world. I wanted to know best architecture for my solution. I have 4 projects in my solution. First is angular.js app solution which has below structure. Is this correct way? 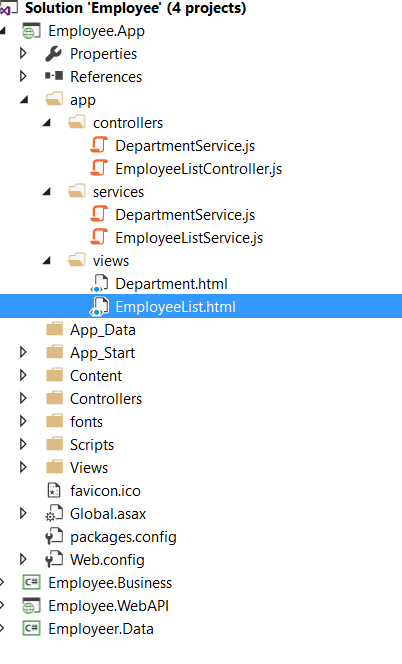 Second project in solution is my webapi.

Fourth project is business layer which has classes to load data from webapi project. I am not sure what actually business layer should have? What is best architecture for such projects?

Ok, what you do is common, but some nuances that needs to be adjusted here and there.

You're using an N Tier for your backend ( Presentation Layer, BL and DAL ) And using a Angular as a Frontend Client.

First off all let's start with your Angular2 project. Is see that you added 'controllers' to it, which isn't necessary. Your angular App should have this flow:

The user interacts with the html which are link to a component. Your components communicate with your services.

A component is used for as a 'View' class, and a service is used to communicate with the backend. When your component needs data, it will ask it to the service, which will make a cal to the entry points of your backend.

So now the backend.

The entry point of you backend is your Presentation Layer (PL), in your case this will be the controllers of your WEB API. As I already said, controllers should not be server in the client, but in the API of the backend. Those are actually the endpoints you communicate with trough your Angular2 Services.

We now have this:

Now There is also the business layer ( BL ) which settles in between your PL and DAL. As your PL is an endpoint for your frontend, and your DAL is your communication point with your DB, you will need a layer that handles all the business logic that happens with your data. This is done in the BL.

You've got a product component in Angular2 which show a list of products.

Your component in Angular will have a variable products. When the component needs to be loaded, it will ask to the ProductService in angular2 to make a call ( HTTP ) to the ProductController from your WEB API in your backend.

The ProductController will have a instance of a ProductService from your BL ( not a product service from angular, same name convention, but different things !).

In the BL's ProductService, you'll handle all the logic you want to with the data. This service has an instance of a ProductRepository ( a class from the DAL which handles the CRUD operations with the database ) and will use the correct method to request the list of products from the DB.

The DAL will have a connection to the Database and will provide the BL with the data they ask. If you want to use an ORM ( like Entity Framework), you'll have to init this in the DAL.

Now as a good practice, to add some abstraction and have a Loose Coupling between your PL Controllers, BL Services and DAL Repositories, you'll want to make an interface for the last 2.

The Controller in PL will have an instance of the service interface instead of the implementation of it, same for the repository in your service. By doing this you'll have more detached and independent layers.

Sorry for the BIG post, but it's a complicated subject.

I'll add some code snippets of the implementation of the backend with interfaces:

The snippets are very naive, it's just to demonstrate the concept.

By changing that you would have one project which servs the frontend which would be a better approach.

Regarding the Employee.Business and Employee.Data its hard to tell from just the name of the projects. But from that little info, I would say it looks ok. Separating DB calls to a seperate project and keepin business logic in a project is a good start.

This sounds like a perfectly valid approach. The business layer should include any business specific logic or rules.