Recently come across an unusual scenario while normalizing an old relational database.

There's ~8 tables linked to a central table, where references between the numerous tables may or may not exist.

There's a lot of data used, and while this table was initially designed, created and mutated over time, performance was taken into account. Thus, there were no linking tables made between the central & other tables.

I'm looking to improve the structure of this, but not sacrifice query performance, since information from all of the tables can be used for reporting.

Question: How would one go about optimizing/normalizing a table structure like the one mentioned, without sacrificing the performance factor?

1: Adding linking tables between them would make queries quite advanced, where if a lookup is done, all of the pivot tables would need to be searched to identify any relations between them. 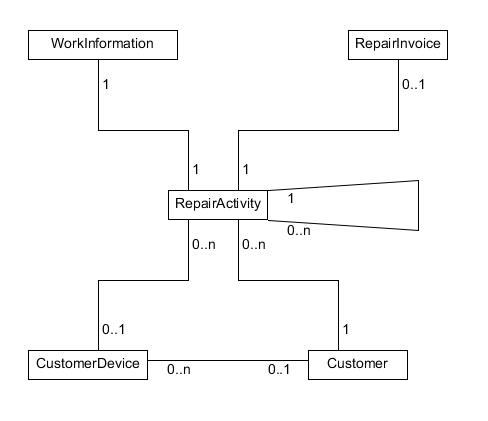 As an example, consider a computer repair store. For the purposes of the example, the following assumptions are made:

Now this is a basic example, and the system mentioned in the question has many more tables attached.

Make shure every tables has a PK, that theres is a FK for every relationship and to add indexes on columns that will be queried often, and create views that abstract you from the joins if you don't want to said joins every time. Performance will be good. RDBMS are optimized to do exactly that.

Long answer including some observations bases on limited information:

Not the answer you're looking for? Browse other questions tagged design database or ask your own question.

11
Database Schema for Pricing Products (packages, promotions, qty based, limited time offer...)
2
Using a single table for identity and metadata
3
Database design with performance issue and use of views
1
Automatic denormalization for a NoSQL database application
13
Database design for objects with multiple states
1
Standardizing data extraction
1
Hybrid Database of serialized data and columns. What issues should I expect
0
Database design to model companies and many roles
0
Finding/determining future data for pricing