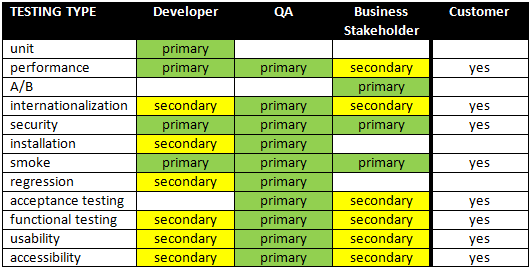 64
Should a developer also act as a tester?
11
Should QA be part of the development department?

6
Bugs keep reappearing in our GUI software during development. How should this be addressed?
4
What Is The Best Technique For Managing Bugs and New Features With Version Control in CVS/SVN for a Team of 6 to 9 People?
1
Facing quality issues
12
We are spending more time implementing functional test than implementing the system itself, is this normal?
6
Shared QA responsibilities on an Agile team
22
How do I create an environment where fixing tests is seen as a priority?
4
How to prevent the vicious circle of testing via customer
4
Summarizing time spent on UI tests
8
How do I write unit tests for legacy code (that I don't understand)?