Let's say we have 5 functional software requirements (R1-R5). Our software design results in 6 modules (M1-M6) or classes to be implemented. I am assuming that the design is more or less optimal, each module having a well-defined purpose and the dependencies between the modules have been minimized.

In one case the relation between requirements and modules will almost be one-to-one, as shown on the left side of the figure below. In another case (different project) it might be many-to-many as on the right side: 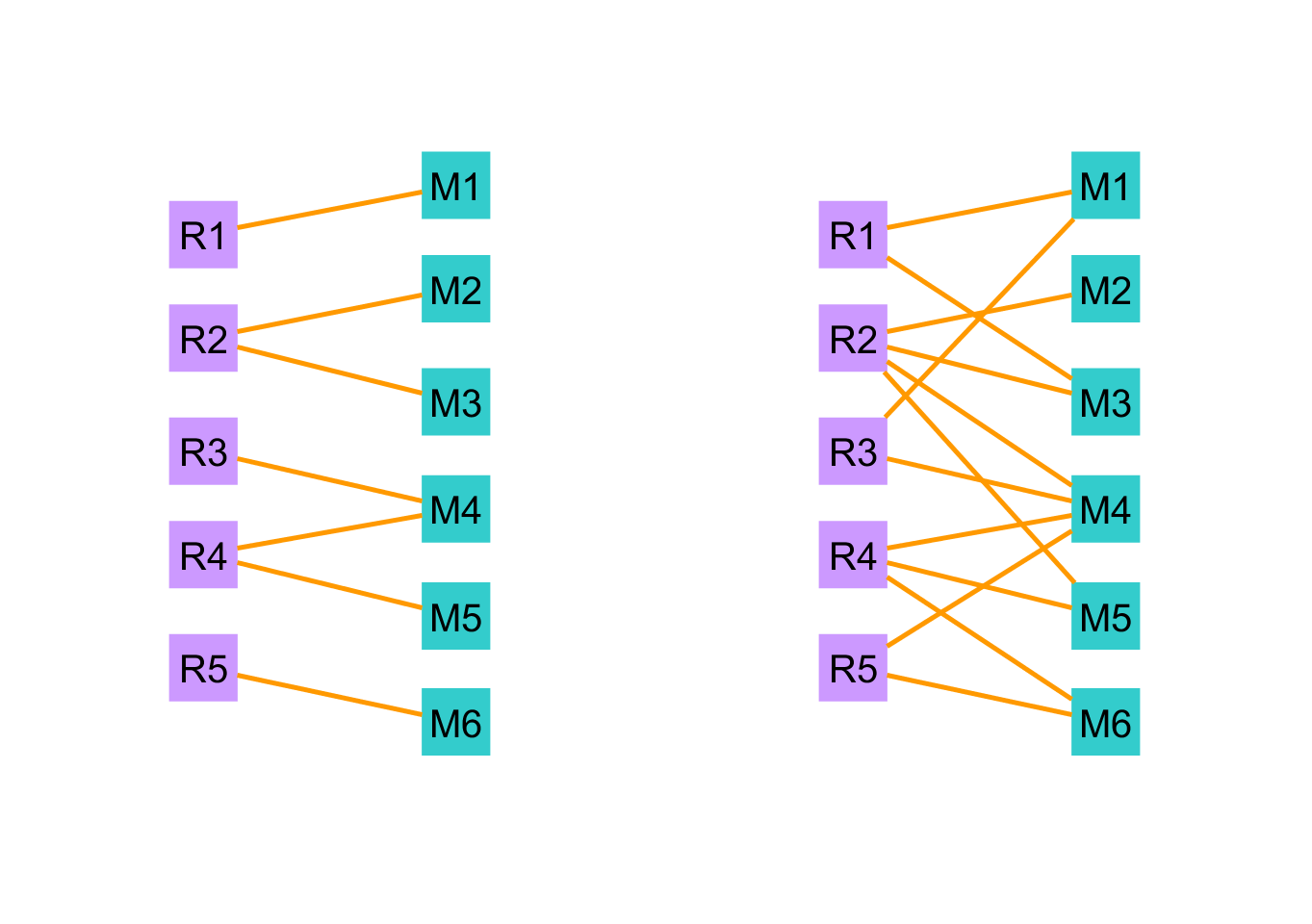 The left version will probably be much easier to handle from a testing and project management point of view.

Relationship between requirements and modules

The relation between requirements and modules is in general not obvious, so that you'll always end up with many-to-many:

Therefore, having a highly interconnected schema doesn't necessarily mean that the requirements are flawed. It can also suggest that you're dealing with a complex system. Or that you have identified many general requirements.

How to simplify the picture ?

A first step for mastering the complexity is to decide what you want to represent:

Another approach is to envisage categories of requirements. For example:

How to use this this diagram to improve your system ?

However, some fundamental theory on systems, like for example Herbert's Simon's "Science of the artificial", suggest that in an optimal structured system, one would expect more interrelation within a subsystem than between subsystems.

Therefore, if you draw only "is implemented in" links, and remove all the general requirements (or better, take only the use-case transactional requirements), then you should come more to a situation like the diagram to the left.

With such a simplified/filtered diagram, a high interconnection might suggest that either the use-cases requirements are flawed (still too general, or too ambiguous). Or that the grouping into modules was not ideally thought.

So, don't think of it in those terms. It's multiple perspectives which create the whole picture which is very important otherwise things get missed.

This is the point we are at in your question. You detailed design should adhere 100% to the arch design, which should adhere to the technical requirements which should adhere to the business requirements. This can be a many to many relationship as the technical implementation may be simple or complex, but needs to do what's technically right, whereas the business needs to articulate in a way that is business right. So the business might have 400 things that are accomplished by 30 modules where it could also be that 40 modules accomplish 9 business things. Those perspectives need to be maintained which is why sometimes it's complex and other times it's really simple.

That being said it's important that your technical modules adhere to the parts as written regardless of the number of simple or complex relationships, just as it's equally important for the other perspectives and roles to do likewise. The "disagreements" or "multi-alignments" are there on purpose to ensure the full application success as those point to possible holes and re-thinking things that may otherwise be easily accepted.

Not the answer you're looking for? Browse other questions tagged design architecture project-management requirements or ask your own question.

8
What FOSS solutions are available to manage software requirements?
21
How to manage and estimate unstructured requirements received from customers
0
How to organize software document for the same application supporing both iOS and Android
4
Designing storage service data structure for decoupled models sharing same data
2
Entities optional relations: separate classes or single class?
4
How "Best" to capture State Transitions in a formal software requirements specification
3
Defining and testing detailed user interface requirements
2
Difference between a Software Requirement, a Feature and an Objective
4
Requirements engineering done in Excel and Word?
1
Relationship between System Requirements and Software Requirements