I recently found out that circular dependencies exist between some .Net assemblies from the following question and I'm looking for some explanation of why these exist:

I've seen plenty of reasons to avoid circular references but are there any benefits? If not, then what is the historical reason of why these exist and why haven't they been cleaned up?

I can conceive of only one benefit of having a circular reference, and even that is rather dubious: less libraries/modules. In order to resolve such a reference between two entities A and B, one usually needs to introduce a third entity C that contains whatever A and B need in common: 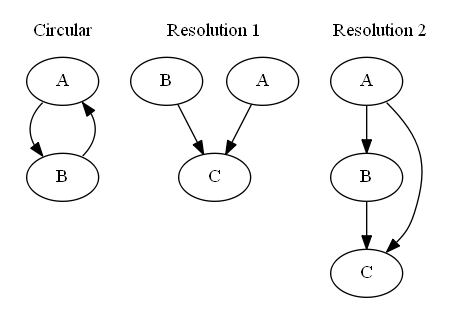 I think that circular dependency was introduced by mistake, and now it is too late to disentangle the libraries involved because, for example, it will break backwards compatibility through the relocation of some public classes or methods.

Not the answer you're looking for? Browse other questions tagged c# design architecture .net code-quality or ask your own question.

35
Why is there no generic implementation of OrderedDictionary in .net?
12
What are the disadvantages of using/writting a .Net Custom Membership Provider?
6
Is MVC ever considered/applied system-wide?
6
How do I resolve $ref in a JSON object?
1
Where view models inside Web project of n-tier application should be placed?
5
Structuring projects in a solution for interfaces
22
Should "Set" have a Get method?
33
Should I check if something exists in the db and fail fast or wait for db exception
0
Distributing C# Dlls to Customers on Application Install
7
What are the benefits of multiple projects over namespaces in a solution?