How exactly should a CQRS Command be validated and transformed to a domain object?

I have been adapting poor-man's CQRS1 for quite some time now because I love its flexibility to have granular data in one data store, providing great possibilities for analysis and thus increasing business value and when needed another for reads containing denormalized data for increased performance.

But unfortunately pretty much from the beginning I have been struggling with the problem where exactly I should place business logic in this type of architecture.

From what I understand, a command is a mean to communicate intent and does not have ties to a domain by itself. They are basically data (dumb - if you wish) transfer objects. This is to make commands easily transferable between different technologies. Same applies to events as responses to successfully completed events.

In a typical DDD application the business logic resides within entities, value objects, aggregate roots, they are rich in both data as well as behavior. But a command is not a domain object thus it should not be limited to domain representations of data, because that puts too much strain on them.

I have found out I tend to face this struggle most often when trying to construct a quite complicated aggregate which sets some rules about combinations of its values. Also, when modeling domain objects I like to follow the fail-fast paradigm, knowing when an object reaches a method it's in a valid state.

Both Transmission and Engine value objects are represented as super types and have according sub types, Automatic and Manual transmissions, or Petrol and Electric engines respectively.

In this domain, living on its own a successfully created Transmission, be it Automatic or Manual, or either type of an Engine is completely fine. But the Car aggregate introduces a few new rules, applicable only when Transmission and Engine objects are used in the same context. Namely:

I could catch this component combination violation at the level of creating a command, but as I have stated before, from what I understand that should not be done because the command would then contain business logic which should be limited to the domain layer.

One of the options is to move this business logic validation to command validator itself, but this does not seem to be right either. It feels like I would be deconstructing the command, checking its properties retrieved using getters and comparing them within the validator and inspecting results. That screams like a violation of the law of Demeter to me.

Discarding the mentioned validation option because it does not seem viable, it seems like one should use the command and construct the aggregate from it. But where should this logic exist? Should it be within the command handler responsible for handling a concrete command? Or should it perhaps be within the command validator (I don't like this approach either)?

I am currently using a command and create an aggregate from it within the responsible command handler. But when I do this, should I have a command validator it would not contain anything at all, because should the CreateCar command exist it would then contain components which I know are valid on separate cases but the aggregate might say different.

The command contains an Id of a users which will have been created and their Email.

The system states the following rules for user's email address:

In this case, even though having a unique email is a business rule, checking it in an aggregate makes very little sense, because I would need to load the entire set of current emails in the system to a memory and check the email in the command against the aggregate (Eeeek! Something, something, performance.). Because of that, I would move this check to the command validator, which would take UserRepository as a dependency and use the repository to check whether a user with the email present in the command already exists.

When it comes to this it suddenly makes sense to put the other two email rules in the command validator as well. But I have a feeling the rules should be really present within a User aggregate and that the command validator should only check about the uniqueness and if validation succeeds I should proceed to create the User aggregate in the CreateUserCommandHandler and pass it to a repository to be saved.

How do you personally handle these complex validations and transformations? I am mostly happy with my solution, but I feel like I need affirmation that my ideas and approaches are not completely stupid to be pretty happy with the choices. I am entirely open to completely different approaches. If you have something you have personally tried and worked very well for you I would love to see your solution.

1 Working as a PHP developer responsible for creating RESTful systems my interpretation of CQRS deviates a little from the standard async-command-processing approach, such as sometimes returning results from commands due to the need of processing commands synchronously.

domain-driven-design business-logic cqrs
Share
Improve this question
asked May 4, 2017 at 9:39

The following answer is in the context of the CQRS style promoted by the cqrs.nu in which commands arrive directly on the aggregates. In this architectural style the application services are being replaced by an infrastructure component (the CommandDispatcher) that identifies the aggregate, loads it, sends it the command and then persists the aggregate (as a series of events if Event sourcing is used).

There are multiple kinds of (validation) logic. The general idea is to execute the logic as early as possible - fail fast if you want. So, the situations are as follows:

Using the above techniques nobody can create invalid commands or bypass the logic inside the aggregates. Command validators are automatically loaded+called by the CommandDispatcher so nobody can send a command directly to the aggregate. One could call a method on the aggregate passing a command but could not persist the changes so it would be pointless/harmless to do so.

Working as a PHP developer responsible for creating RESTful systems my interpretation of CQRS deviates a little from the standard async-command-processing approach, such as sometimes returning results from commands due to the need of processing commands synchronously.

I'm also a PHP programmer and I don't return anything from my command handlers (aggregate methods in the form handleSomeCommand). I do, however, quite often, return information to the client/browser in the HTTP response, for example the ID of the newly created aggregate root or something from a read-model but I never return (really never) anything from my aggregate command methods. The simple fact that the command was accepted (and processed - we are talking about synchronous PHP processing, right?!) is sufficient.

We return something to the browser (and still doing CQRS by the book) because CQRS is not a high level architecture.

An example of how command validators work: 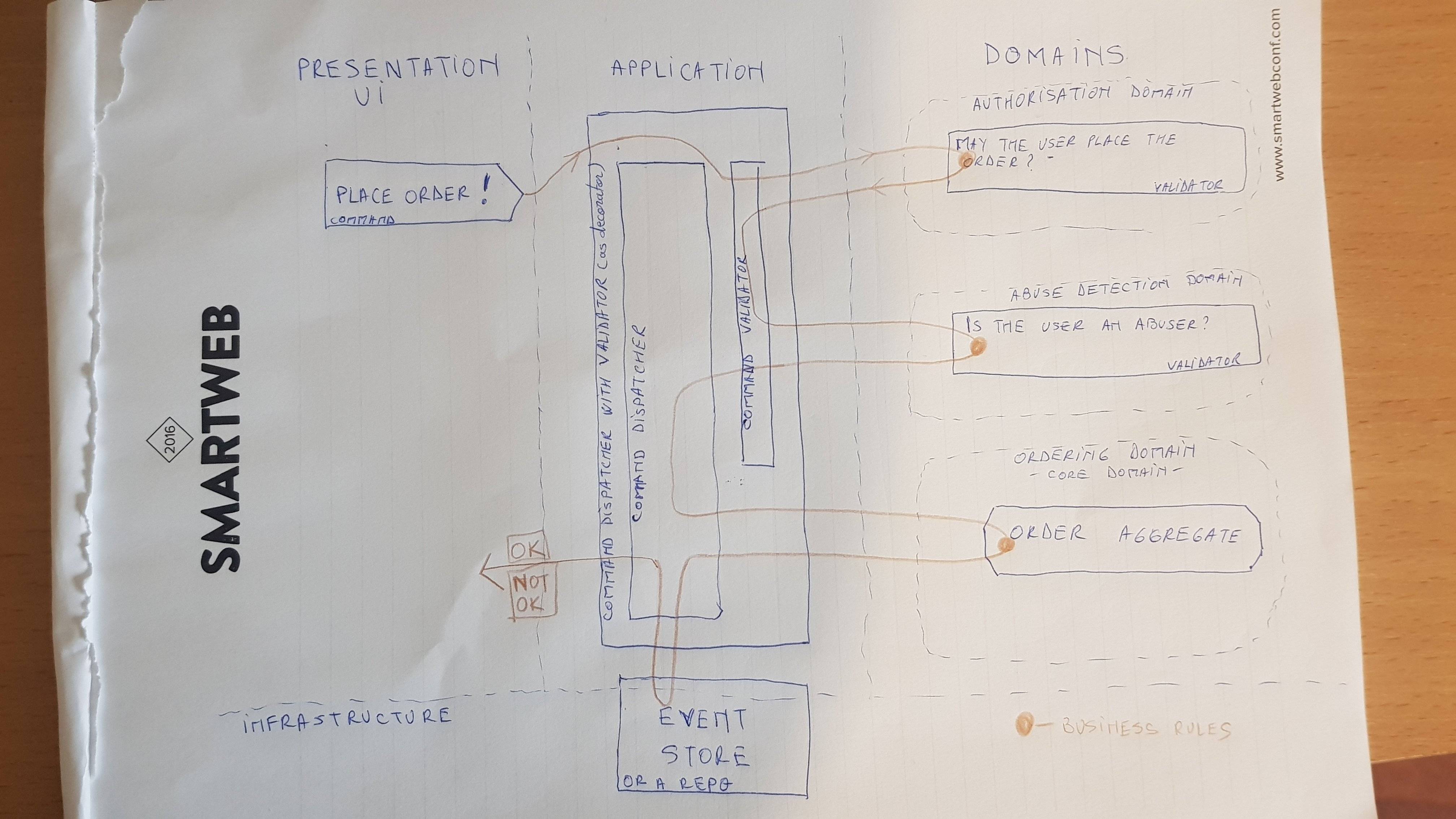 One fundamental premise of DDD is that domain models validate themselves. This is a critical concept because it elevates your domain as the responsible party for making sure your business rules are enforced. It also keeps your domain model as the focus for development.

A CQRS system (as you correctly point out) is an implementation detail representing a generic sub-domain which implements it's own cohesive mechanism. Your model should in no way depend on any piece of CQRS infrastructure to behave according to your business rules. The goal of DDD is to model the behavior of a system such that the result is a useful abstraction of the functional requirements of your core business domain. Moving any single piece of this behavior out of your model, however tempting, is reducing the integrity and cohesion of your model (and making it less useful).

Simply by extending your example to include a ChangeEmail command, we can perfectly illustrate why you don't want any of your business logic in your command infrastructure as you would need to duplicate your rules:

So now that we can be sure our logic needs to be in our domain, let's tackle the issue of "where". The first two rules can be easily applied to our User aggregate, but that last rule is a bit more nuanced; one that requires some further knowledge crunching to gain some deeper insight. At the surface, it may seem like this rule applies to a User, but it really doesn't. The "uniqueness" of an email applies to a collection of Users (according to some scope).

Ah ha! With that in mind, it becomes abundantly clear that your UserRepository (your in-memory collection of Users) may be a better candidate for enforcing this invariant. The "save" method is likely the most reasonable place to include the check (where you can throw a UserEmailAlreadyExists exception). Alternatively, a domain UserService could be made responsible for creating new Users and updating their attributes.

Fail fast is a good approach, but can only be done where and when it fits in with the rest of the model. It can be extremely tempting to check parameters on an application service method (or command) before processing further in an attempt to catch failures when you (the developer) know the call will fail somewhere deeper in the process. But in doing so, you will have duplicated (and leaked) knowledge in a way that will likely require more than one update to the code when the business rules change.

Not the answer you're looking for? Browse other questions tagged domain-driven-design business-logic cqrs or ask your own question.

8
Where should I put Validation Logic when using CQRS?
8
Zero argument constructors and Always Valid entities

11
Should I use the repository in the Domain Object or push the Domain Object back to the Service Layer?
23
DDD CQRS - per-query and per-command authorization
22
When using DDD and CRQS, should be exactly one event per command?
0
CQRS, Where exactly is business logic that coordinates between aggregates?
13
Should CQRS Command perform a Query?
0
Anemic Domain Model, CQRS, command bus
2
Dealing with property-level permissions in DDD and should UI or authorization influence the domain model?
4
DDD and MediatR - where the Validation and Business Logic go
1
Primitive obsession, value objects, Commands, Events and where to convert