Should I add complexity to my POCO data objects to reflect their relationships, or wrap them in a more complex class?

I've got a set of immutable POCO objects that reflect database content. These have a one-many relationship:

Because Property has only one PropertyType, and it holds information that is frequently going to be used by the consumers of Property, I've added complexity to my POCO object by integrating it. Property has a reference to PropertyType. Whenever I get one from the database I do a join and build an object with PropertyType present:

I'm a little uncomfortable with this. It seems to be 'polluting' the purity of my Property data object adding the relationships to it.

However it's very convenient, as you almost always need to know the PropertyType of a property.

As a result I'm starting to consider adding PropertyTypeMetadata as a property of PropertyType and doing the same thing as above.

I figure I've got three options:

My attempt at a diagram: 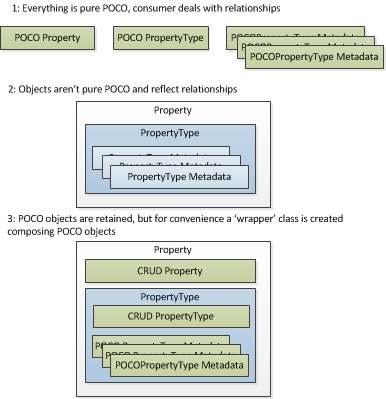 Example of current (C#, but it shouldnt' matter too much) class:

I think this a case of over genericising (if that's a word?)

9
What is this domain of study?
3
Pros/Cons for a Data Structure covering multiple databases?
6
Is there a way to track data structure dependencies from the database, through the tiers, all the way out to a web page?
4
Patterns for a tree of persistent data with multiple storage options?
2
Pattern / methodology for representing large database records as objects
8
How to handle complex calculated fields in an ORM
1
According to Clean Code, is it okay to add a single constructor to a plain data structure?
1
Should static and historical data be split in the API? To what extend?