How data is accessed in Memory-Mapped I/O?

This is an example of Memory-Mapped I/O: 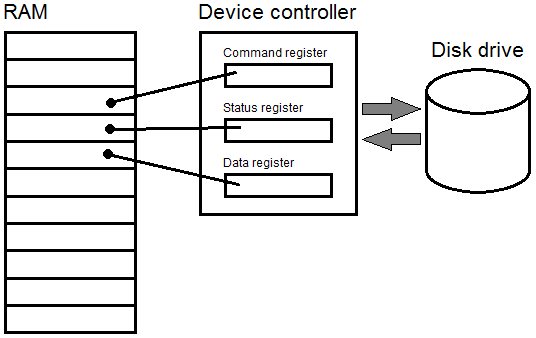 So basically you access the device controller registers through memory.

So basically you access the device controller registers through memory.

Not exactly, which is why the diagram in the question doesn't quite depict memory-mapped I/O.

Memory-mapped I/O uses the same mechanism as memory to communicate with the processor, but not the system's RAM. The idea behind memory mapping is that a device will be connected to the system's address bus and uses a circuit called an address decoder to watch for reads or writes to its assigned addresses responds accordingly.

The simplest example of this I can think of is the speaker in the Apple II, which makes a single click any time there's a read from or write to address 0xC030. The address decoder looks for the bits on the address bus to be exactly 1100000000110000, and when those conditions are met, a line on its output goes high, triggering the audio circuit that makes the click. More sophisticated devices might be stimulated to react to what's been put on the data bus (e.g., when the CPU writes to a control register mapped at one address) or place some of its own information there (when the CPU reads from a status register mapped to another).

As long as all of the timing rules of the bus are followed, the processor doesn't know or care that it wasn't RAM. (RAM, in fact, works exactly the same way.) All of this is done on a best-effort basis; the CPU can write to an address where there's nothing to respond to it and whatever was written gets lost in the ether; similarly, a read will result in random garbage. What's important to take from this is that there's exactly one read or write of the data, which is when it's on the bus. There's no writing to memory and then to the device, no pointers or anything else. The data exists on the data bus during that one read or write cycle and that's the end of it. The device may or may not store the value internally, but that's a function of the device, not the I/O mechanism.

As drawn, the diagram illustrates Direct Memory Access or DMA, where the device is instructed to negotiate for use of the bus to do an I/O of n bytes to or from address a in RAM and signal the processor when finished. This is almost always used for bulk data transfer (disk blocks, Ethernet frames, buffered graphics) and almost never for control and status, which is usually done memory-mapped.

Not the answer you're looking for? Browse other questions tagged hardware io computer-architecture or ask your own question.

14
How does a DMA controller work?
2
Data padding for different hardware support?
3
How “close” should a IO class/logic be to a form or thread that controls the IO device?
3
Are “Control register” and “Status register” and “Data register” part of the device itself?
1
Can an IO device have some memory space or can it only have registers?
1
Can the CPU manipulate the pins of an IO port directly?
6
How does the Base Address Registers (BARs) in a PCI card work?
6
What does “address space” means when talking about IO devices?
1
is it possible to increase the offset in a jm(jump command inside)?