It's maybe an old horse to beat (not dead yet?), but I'm wondering if OCL allows modeling the problem of the business rules for building houses and hotels in the game of Monopoly within a domain model (conceptual class diagram, separate from an implementation).

I've supplied the rules after my naive attempt, but I'm not sure how to go about capturing the ordering aspects in OCL. That is, one must own all properties of a colour-group, then build the houses on those properties "evenly" (see below), then replace the 4 houses on a property with a hotel, etc. There is also the case of a "housing shortage" because there are only a total of 32 houses and 8 hotels in the game. I realize this question is ambitious, but I'm trying to see if it's possible in OCL and to have some pointers of where to go.

So far, I've managed to specify the fact that a property can't have houses and hotels at the same time with the {xor} option between two associations. 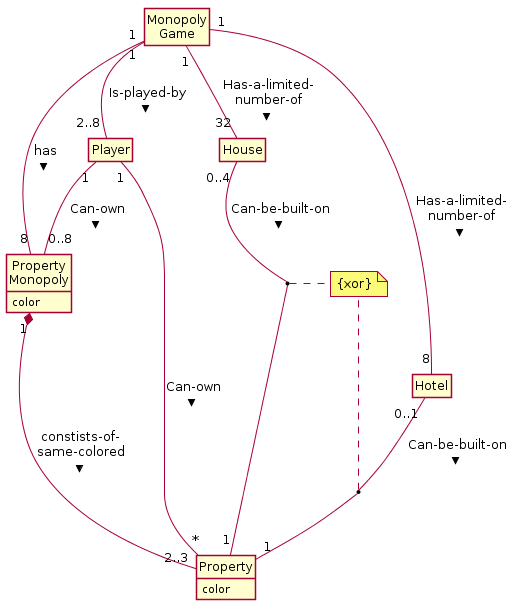 Here are the rules concerning Houses and Hotels, cited from a fan site.

When a player owns all the properties in a colour-group they may buy houses from the Bank and erect them on those properties.

If you buy one house, you may put it on any one of those properties. The next house you buy must be erected on one of the unimproved properties of this or any other complete colour-group you may own.

The price you must pay the Bank for each house is shown on your Title Deed card for the property on which you erect the house. The owner still collects double rent from an opponent who lands on the unimproved properties of there complete colour-group.

As you build evenly, you must also break down evenly if you sell houses back to the Bank (see SELLING PROPERTY).

N.B. This is not a homework, although it would make a great one maybe for a graduate class?

Of course, OCL allows you to define pre and post conditions on methods (i.e. pre and post keywords). This could express that "before adding an hotel, you'd need 4 houses on the property, and that after adding the hotel you have no longer any house". However, these kind of constraints make diagrams quickly unreadable for the common mortals. And readability is the main purpose of UML diagrams.

A more pleasant approach would be to use a state diagram to document the allowable state transitions and the corresponding constraints. This has the benefit of making a clear distinction between structural constraints and behavioral constraints.

Not the answer you're looking for? Browse other questions tagged requirements domain-model ocl or ask your own question.