I'm trying to learn the N-Layer architecture and several other things, and I have a C# solution where I have the following layers:

Does this setup seem correct?

It should pretty much mimic the following image: 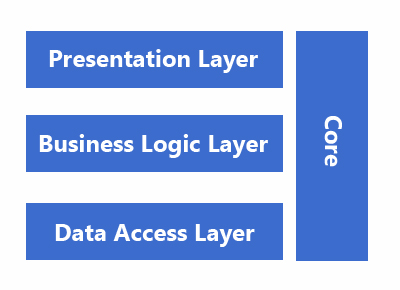 When structured like this, it seems very loosely coupled, however, an issue arises when I want to define a repository interface for an entity. The issue obviously being that I would have to reference the DAL project in order to use the entity in the interface... I can't figure out where I've gone wrong or what steps to take to correct this issue.

The generic repository interface in Core.Repositories:

An example repository interface where said issue would arise (Also in Core.Repositories):

So in conclusion, should I not be using the repository pattern in this case, or what steps can I take to rectify the issue?

I am creating specific repositories, but I'm using the generic repository as a helper, so that I don't need to repeat stuff like "GetAll", "Add", or "Find".

When defining my interface I should have done this:

And then in my class:

Obviously I need to repeat some code like "GetAllChildren", "GetAllParents", & etc. - I guess I'll just have to live with that.

Its correct. but your repositories should return business objects, not database 'entities'

Secondary point. Generic repositories are somewhat frowned upon. Its best to have specific repositories with methods that allow you to make full use of the database to retrieve the exact data you need.

Not the answer you're looking for? Browse other questions tagged c# architecture entity-framework repository or ask your own question.