The way the UpdateService interface is declared, a user may create a task over the task service executing the update method. By letting the user freely configure a task with any string is mostly certain erroneous. The interface, in this case, therefore should present a list of predefined values, which can be used with the update method.

As it is, the update service also knows a getter method which reveals all available update. This would be ideal as a source for the predefined values.

That's why I came with the following approach:

The @Operation interface is introduced to a couple parameters. The task service still scans all given service interfaces for @Operation annotations, to present a defined list to the user.

With the help of reflection, the task service executes the sourceMethod and will offer the returned values generically as predefined values for the task configuration of the update(String updateFileName) method in the user interface. The user can select such a value and schedule the update method with this selected value as an argument.

This example is very basic and currently would only work if the annotated method would have 1 argument. Although it would be completely generic and decoupled.

Is there a better way to solve this issue? Or isn't this approach that bad at all?

The design you presented has issues

If you want to separate the concerns of updating and the service that executes it, I suggest collaboration. 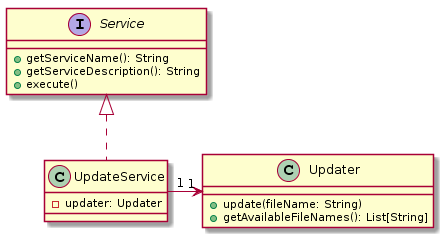 This design has the benefit that it can execute any method on any object instead of just those with a single parameter. The concerns are separated, and each piece can be unit-tested independently.

It seems to me you are reinventing interfaces. Annotations have their uses, but here you are coupling methods (update() and getAvailableUpdateFileNames()) through annotations. This is going down a rabbit hole, since you would also need to verify the types of the collection returned by the getter matches the type expected by the operation. This will be non-trivial, and is exactly what interfaces are intended to solve.

I understand you want a single class to implements multiple operations. I think you should reconsider this requirement. If an operation were a single method it might work, but since an operation is a bundle of interdependent methods, I think it would be breaking the single responsibility principle.

I suggest you define an Operation interface. Then you could have a Service class expose a collection of Operations.

Not the answer you're looking for? Browse other questions tagged java reflection annotations or ask your own question.

7
var args constructors/methods vs lists
1
Service method, bean as an argument and mandatory attributes
6
What is the process of determining which method in a class hierarchy should execute known as?
2
Why do most language's definition of substring allow substring("abc", 3) => ""
5
Recommended value to pass instead of String parameter for a method in java
10
Why is cyclomatic complexity that important for a single method?
1
Service layer with DTO
0
Preferred method signature for API method involving DB interactions
0
Populate values in a map from a series of function calls