I am trying to write a simulator where multiple AI agents are competing and/or collaborating to achieve the goal of maximizing some utility function.

Each agent has the ability to interact with the world where it might alter the state of the environment, based on some actions it does. And as a result of such actions, a reward signal is transmitted from the environment to the actor (agent implementing the action).

Some agents are designed spectate other agents' actions and rewards, so it would not have to suffer all consequences while it learns optimal moves.

What I did initially, is defining the following methods on the environment class:

But this seems to complicate my design and prevent me from scaling the system afterwards.

I was seeking some general way for different agents and environment(s) to interact without explicitly calling methods of certain type or sending out an identifier to the actor.

Meanwhile, curious agents would read a copy of the returned message that is published for whomever is interested.

This might sound like an observer pattern, except that each agent and the environment(s) are eligible for observing interactions, both for direct interaction and for learning from others' mistakes.

That means, notifications are bidirectional, so it will be an overhead for each object to maintain a list of subscribers to notify when some event occurs. Also, since this is an AI simulation, some processes might be stochastic, e.g. spectating might not be 100% of the time for curious agents. 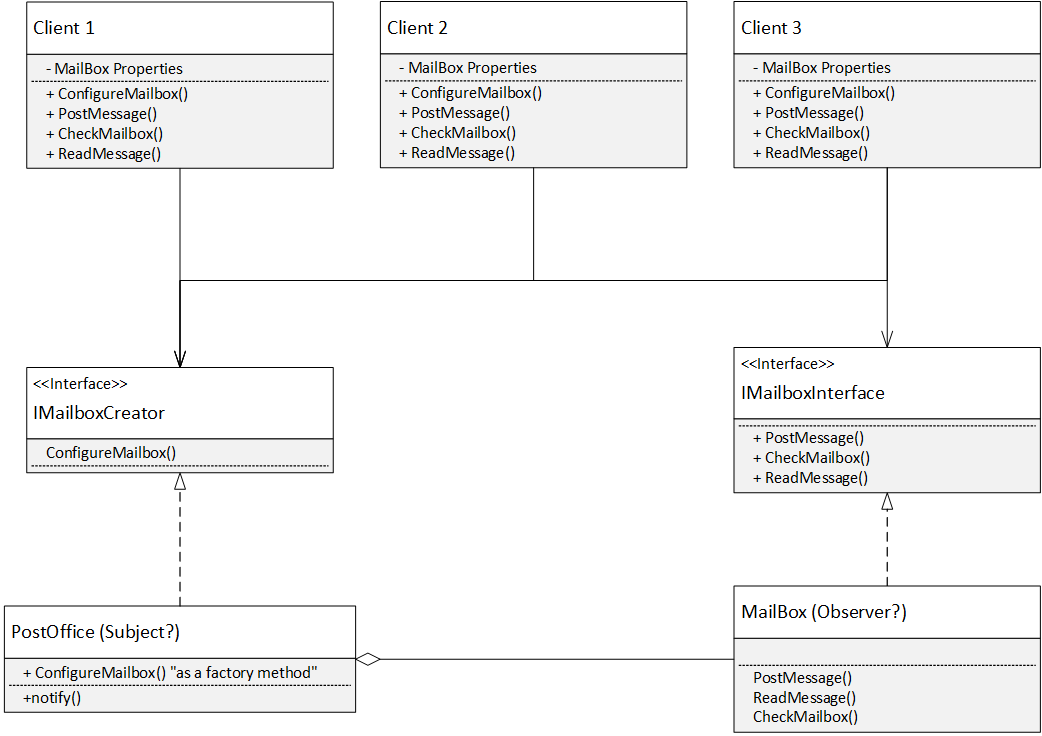 And what I called PostOffice, would have a Factory method, spawning a mailbox object for each object attempting to message other objects.

So whenever a client object attempts to mail some other object, they would lookup some sort of a directory method, and send a message to the identified mailbox address through the associated mailbox object.

Mailbox object in turn, will notify the post office object, that will forward the message to the receiver mailbox, that will hold this message until the receiver client checks for a message and reads it.

But this seems to complicate my design and prevent me from scaling the system afterwards.

I was seeking some general way for different agents and environment(s) to interact without explicitly calling methods of certain type or sending out an identifier to the actor.

Please, see the "Java" section so you understand it better: https://en.wikipedia.org/wiki/Mediator_pattern

Also, use the Command pattern to create possible "actions" that might be performed by an actor in some specific environment. Don't implement the interactions between actor and environment right in your environment class. Doing this might help your project scales in a better way for new future ways of interactions.

Not the answer you're looking for? Browse other questions tagged design-patterns message-queue messaging simulation esb or ask your own question.

5
Parameterize Agent Based Simulation (OOP-Question)
1
Mingling DB transactions and logging from a design perspective
1
Microeconomical simulation: coordination/planning between self-interested trading agents
2
Using short-lived REST requests to obtain messages from a message queue for clients
2
How to design the interactions between these agent behaviors?
4
distributed application design - using message broker
4
How to organize business logic which deals with different, but related objects