What does "data bus control" mean?

This video mentions the following: 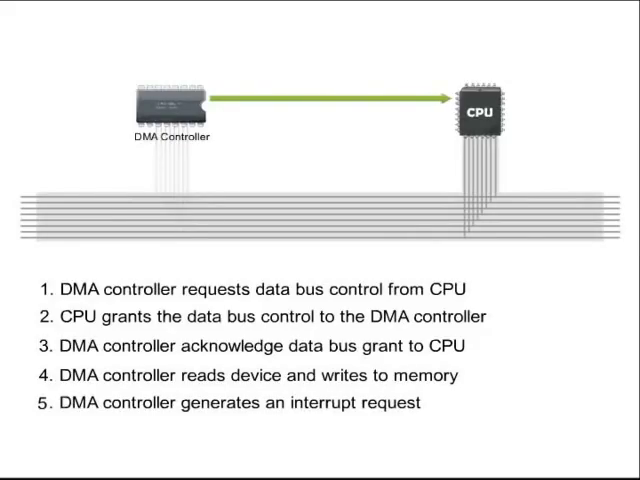 Yes. The DMA controller takes ownership of the bus for the duration of the transfer.

That said, I feel obliged to point out that at least on PC-based machines, DMA controllers have been almost entirely obsolete for quite a while now.

On a reasonably modern machine, the DMA controller is used only for I/O to/from floppy disks (and only "directly" connected floppy disks--a floppy that connects via USB doesn't count).

There was also a short time that DMA controllers were used for hard drive transfers, but that was a long time ago (PC-XT) and became obsolete only slightly more recently (PC/AT).

In addition, the DMA controller(s) in a PC depend on specific characteristics of the original ISA bus. To do a DMA transfer, the DMA controller told the bus that it was doing both a memory write and an I/O read (or vice versa) simultaneously. This read data onto the bus, and wrote data to memory (or, again, vice versa) in a single bus cycle.

However, the PCI bus (and PCIe) doesn't have separate lines to be able to simultaneously assert that it's doing an I/O read and a memory write. In any given bus cycle, it can only do one of these types of transactions.

So, when the PCI bus came into use, DMA went from obsolete to downright...well, I can't think of a better term, but became an even worse prospect. Modern computers include a fair amount of jumping through hoops to allow DMA controllers to still work, just in case you decide to use a non-USB floppy disk, but the reality is that nowadays, most machines are probably bought, used, and thrown away, without ever (even once) actually using the DMA controllers.

On a reasonably modern machine, the closest analog of DMA that actually gets used enough to notice is bus mastering controllers. A bus mastering controller works vaguely similarly to a DMA controller. The difference is that instead of having one DMA controller for all peripherals, each peripheral has its own specialized controller that can get control of the bus, do a transfer (e.g., directly to/from the machine's main memory) and then give up its control of the bus. This has a number of obvious advantages--primary among them that it actually works with PCI and PCIe. I suppose I should add: with the advent of PCIe, even that's not really accurate anymore either. PCI was a bus, but PCIe isn't. Instead, it uses a switch fabric, so (among other things) if A wants to talk to B, and C wants to talk to D, those transactions can happen simultaneously, whereas on a bus only one transaction would have been allowed at a time.

Anyway, DMA is almost entirely a historical artifact. If you want to learn more about DMA-like processes that's relevant to a current computer, you probably want to study bus mastering.

Not the answer you're looking for? Browse other questions tagged memory hardware cpu io computer-architecture or ask your own question.

15
How does a DMA controller work?
2
What does "issue or start an instruction" mean?
3
Are "Control register" and "Status register" and "Data register" part of the device itself?
1
Can an IO device have some memory space or can it only have registers?
3
How data is accessed in Memory-Mapped I/O?
1
Can the CPU manipulate the pins of an IO port directly?
6
What does "address space" means when talking about IO devices?
2
How do peripherals decide which address to use in memory-mapped I/O?
0
Is it possible for the CPU to read or write to the cache, while I/O device is reading main memory?