architecture for the application

I am implementing some kind of web application that has basic social network functionality and browser text game. I do it basically for myself only in order to learn couple of things. (like using websockets and full-stack development)

So the architecture I came up with looks like this 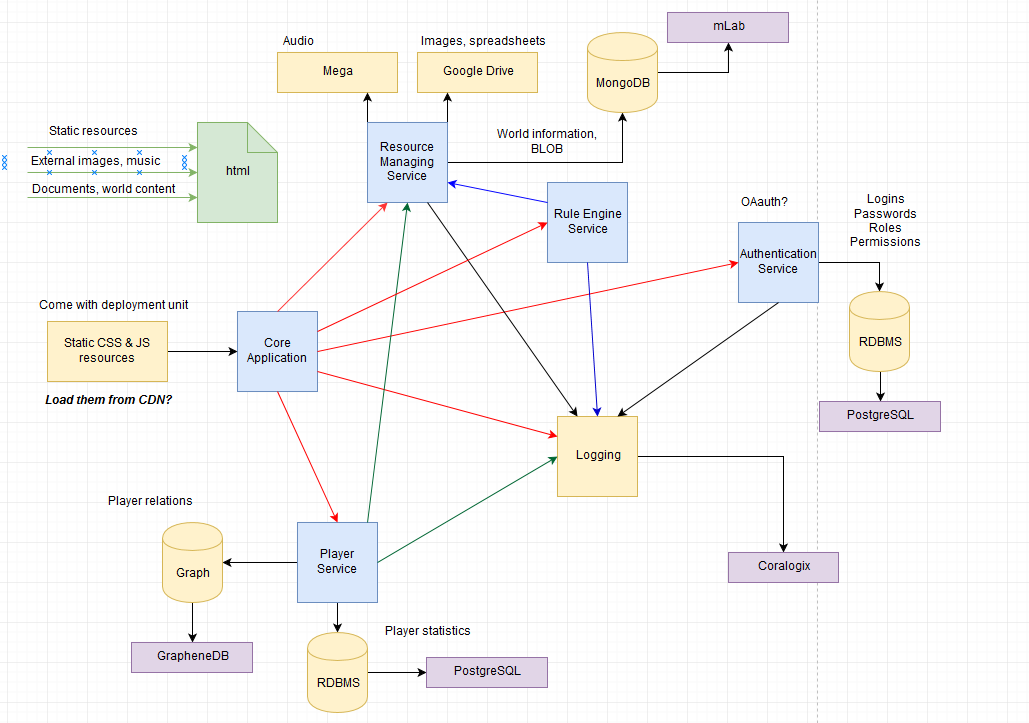 Generally my web pages consist of

I am planning to introduce some communication module that would allow players to chat but there is a long way to go until then.

As I have a tendency to over-engineering, I decided to ask a question: Did I over-engineer or not? Also I am not sure whether I need middleware like AMQP or JMS. I presume it is a must for such applications.

My problem is that I want to use everything for free as it does not have big scale - so I have to come up with some workarounds for storing resources and environment. I use heroku to deploy my application and so I use add-ons for it like grapheneDB or coralogix. (maybe I will switch to aws someday)

So could anybody evaluate my architecture?

If this technical architecture is the simplest possible solution that solves your business problem, then it's great, you didn't over-engineered it. But your description is not enough for me to understand if this is the case.

First of all, what are my personal criterias if the architecture is ok? In other words, what what characteristics my services should possess?

In order to do that you need to identify your business-architecture first. In other words, you need to identify the logical parts of your system, what they comprise of an how they communicate with each other. I use the technique called Business-capability mapping. It comes down to the following:

What helps me is imagining how a system worked, or would work a hundred years ago. Basic logical parts stay the same, basic communication paths do either.

This is primary activity, the one you should begin with. The other things like mongo, graph databases and the like goes after.

Here is an example of an approach I outlined.

Did I over-engineer or not?

It depends, sort of, on what we mean by over-engineering.

You are showing 3-4 different storage technologies, SQL, Graph, MongoDB, and a Resource Manager. It is hard to know if that is or isn't overkill without getting deeper in to the other aspects of the architecture, but does beg the question.

However, there are other aspects to engineering, such as requirements gathering, use cases, non-functional specifications (e.g. performance requirements at expected load), conceptual architecture, etc..

You might consider using a methodology or design framework in engineering a solution. Something like DDD and/or other. Formal or more informal. Being more formal might also be considered over-engineering, especially in contrast with popular Agile methodologies.

You're using color to distinguish certain classes of entities and relationships, so that's a good start. You might define those colors using a legend of some sort. Also labeling arrows is generally a good thing when communicating architecture via diagrams.

You've focused mostly on technological choices for implementation, which we might consider part of logical and/or physical architecture.

There's higher level architecture that can be described, if you like, which might go to contextual or conceptual architecture.

For example, you might document your persistent data structures at a conceptual or logical level on the one hand, and on the other hand, behaviors and responsibilities of the system and its components. Various workflows through the application and components.

For example, there's not a lot of clarity on what the output of the Rules engine is, when/how it is used; it has a relationship to the Core Application but not the Player statistics, which seems possibly inconsistent with the textual description.

Not the answer you're looking for? Browse other questions tagged java architecture microservices or ask your own question.