I'm doing the exercise 10.1, page 476 from the book Java: How To Program, Early Objects by Paul and Harvey Deitel (10th Edition).

Modify the MyLine, MyOval and MyRectangle classes of GUI to create the class hierarchy as shown in picture below. Classes of the MyShape hierarchy should be “smart” shape classes that know how to draw themselves (if provided with a Graphics object that tells them where to draw). Once the program creates an object from this hierarchy, it can manipulate it polymorphically for the rest of its lifetime as a MyShape. 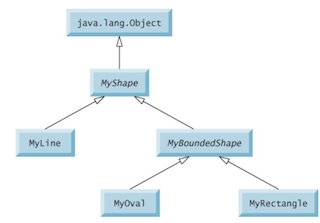 The original MyLine, MyOval and MyRectangle which we're supposed to modify, all inherit from JPanel and therefore easily paint themselves with the help of paintComponent().

I'm thinking how to approach this. One solution would be creating another class, say MyPanel which would inherit from JPanel. Then the constructor in MyPanel would receive a MyShape object (MyLine, MyOval or MyRectangle) and the draw it using paintComponent(). In that case MyPanel would also have to know what kind of object is MyShape so I'd have to perform multiple checks with either instanceof or pass a parameter to MyPanel indicating exactly what shape I'm interested in so paintComponent() knows what to draw.

I'm really not sure what is the best practice in such case.

Using instanceOf will work but condemns you to writing procedural code. If you want to write flexible code consider sticking with polymorphism.

Well no. MyPanel would only have to know that it holds some MyShape object on which it can call paintComponent(). The object being called knows what to do so the calling object doesn't have to.

That's what's cool about polymorphism. Exactly what to do is something else's problem.

Done this way the trainer doesn't even need to know which animal she's talking to.

Not the answer you're looking for? Browse other questions tagged java design object-oriented-design inheritance abstract-class or ask your own question.

27
Decoupling classes from the user interface
20
Best design for Windows forms that will share common functionality
8
Are trivial protected getters blatant overkill?
0
2 Classes that share similar behaviours but unrelated.
3
What public interface should I offer for creating objects that know about each other?
3
Design Pattern for Indirectly Connecting Two Classes
1
Create object(s) to cater for two data sets that are the same entity but one has an additional element