I am developing some kind of web-based RPG. So for my player domain I came up with this.

player object is going to have a lot of parameters like class, level, name and so on. As it rather plain object I store it in the relational database like PostgreSQL for example. I have an entity RPlayer for that.

Also I wanted to introduce for the player the ability to make contacts with other players - some basic feature of social network. For that reason I decided to use graph database like Neo4J. I have an entity GPlayer for that. It is simpler object with some unique fields like id or name.

As object became somehow distributed - I keep the data for it in different storages - I added mapping of id in RDBMS to id in graphDB. In the end it looks like this. (I don't know how to add fields in draw.io to table so I have only three fields here and name is missing). 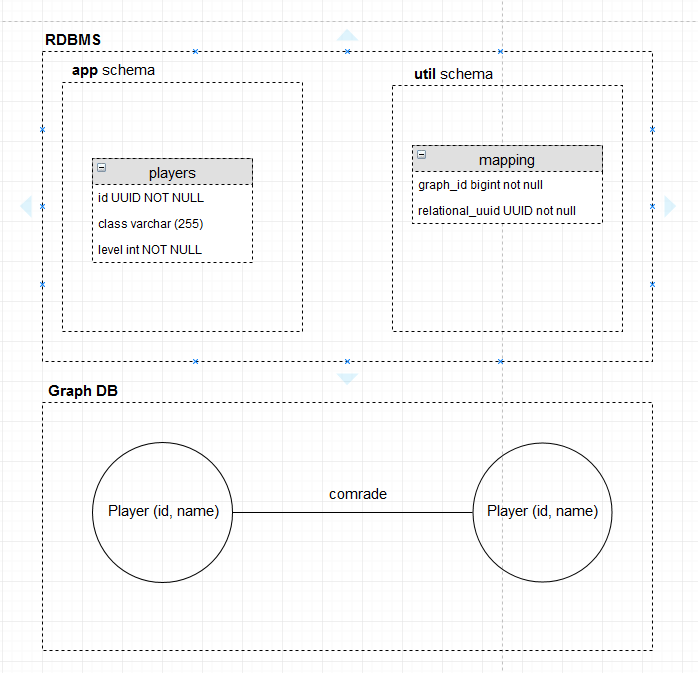 I didn't connect players and mapping table as one of the fields is external so I had no reason to connect relational_uuid to id in players table. 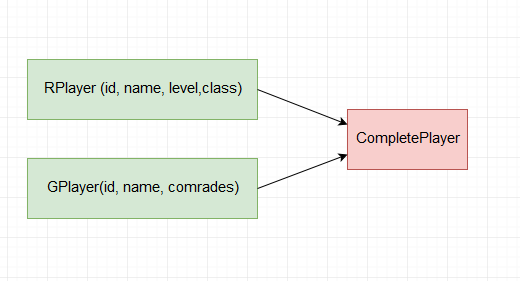 When I add new player

Also those 3 steps I am planning to do in scope of global transaction.

Does such approach is ok? Should I somehow store domain in the single database and not spread it across different storages?

In principle, you're not wrong (assuming you really do need separate databases). A few possible improvements:

Especially the last point depends a lot on what you're really using the graph DB for. However, if the information you retrieve is reasonably complex, loading it every time may not be wise. If it is simple (e.g. just who's a comrade of whom?) then you might be better of getting rid of the graph DB altogether.

Finally, if you have to do complex graph queries, but also have a simple feature like the one mentioned above, you could replicate the simple information in the relational DB.

2
Best practice modelling an active record entity using Linq-To-SQL as DAL
1
Processing csv files (alternative to business logic in DB)
2
Designing a social network with CQRS, graph databases and relational databases in mind
2
DDD: storing additional data with the model
1
Got confused while designing Aggregates
0
architecture for the application
7
DDD: Identifying aggregate root in a simple example application domain
2
Database modeling. Many to Many relationships. Link tables
0
Is changing the domain according to the user privilege on specific fields considered as anti-pattern?