Architecture for a Tower Defense game with multiple towers of similar type?

I'm trying to create a Tower Defense game where minions move through a labyrinth and you can build towers on top of the labyrinths' walls to stop the minions. I'm personally using Python and pygame, but I'm looking for generic design answers that can be applied to any OOP language.

So, since both minions and towers have a size and a position, as well as a sprite image, I felt like it'd be appropriate to create a common base class:

Alright so I want my game to work similar to Vector TD, where you have multiple different types of towers that can be build, but you can build multiple instances of each type, and each instance can then be upgraded individually. What this means is that I need some kind of generic way to explain how all towers of similar type work, yet I need each instance to be separated. So I began with a Tower base class with all the properties I can think of:

But the problem is, all turrets of the same type have same range, same attack speed, same cost, etc. but they're still individual instances, so it would feel stupid to copy all of these common properties with the same values to every instance separately.

The reason I don't just subclass Tower to create my custom tower types is because they don't really add anything to the class. Literally the only thing they would do is change the default values for the __init__'s arguments. Using subclasses like this would also lead into the common values being copied into every instance, so if my subclass GreenTower defaulted range=800 for all my turrets, it would mean that the value 800 would be stored separately into every instance (when they could just use a common value). I just feel like there's a better way.

So my question is entirely about the design/architecture/structure of the system. How should I group these properties together while still allowing individual turrets to be upgraded separately? Ideally I could be able to design these tower types in something like JSON where I can dynamically load them to the game.

You can also decorate your turret instances so that you get most of the properties from the flyweight but modify specific ones as needed for specific turrets. You can even have flyweights that decorate other flyweights. It all depends on your needs.

Why on Earth would it bother you that a range value is stored in every instance of a tower? Are you trying to save the extra 2 bytes per instance? If you're severely memory constrained in your game, that's a different matter, but that doesn't sound like the problem. And if at some point in the future you want to make towers that give temporary bonuses to some other towers, wouldn't you want for each one to have their own stats fields?

You do have a valid point that making a subclass just to set some default values seems ridiculous. And it is. That's what factories are for. Just make a class that knows about the various defaults, and ask it to make whatever flavour of tower you want at the time. It would go something like this (excuse the Java syntax):

It's a bit difficult to tie in with a JSON configuration, but entirely possible. You'd need to pass some identifiers around to the various classes involved, but your factory would be the one that, when requested for a particular type of tower, would look at the actual values and construct the appropriate object. The signature would then be more like:

You'd want the factory to also handle permanent tower upgrades, as it will be the one to know what upgrades to what and how.

In your case I would just use this Tower base class and subclass it with all the towers at every single level possible that you can instantiate as startup, like BlueTowerLv1, BlueTowerLv2, GreenTowerLv1, etc, with a reference from BlueTowerLv1 to BlueTowerLv2 so that it knows what tower to use when leveling up (a null/nil for next_tower could indicate that the tower has reached a maximum level).

However, these towers are "meta towers". They don't get instantiated for every single tower instance the user creates. Instead they get pointed to (referenced) by all the towers the user creates. It is basically the flyweight pattern Jimmy describes but with a bit more detail specific to the nature of TDs.

That's in a case where the scope is small enough that you can just hard-code all the tower types and their properties at every level possible, and that there aren't an infinite number of levels possible. If you want to use a formula to generate the properties of each type of tower at every level, you can just generate the tower instances at startup based on that at which point you don't have to bother to create a unique identifier for, say, BlueTowerLv3 (it might just be stored in a list). 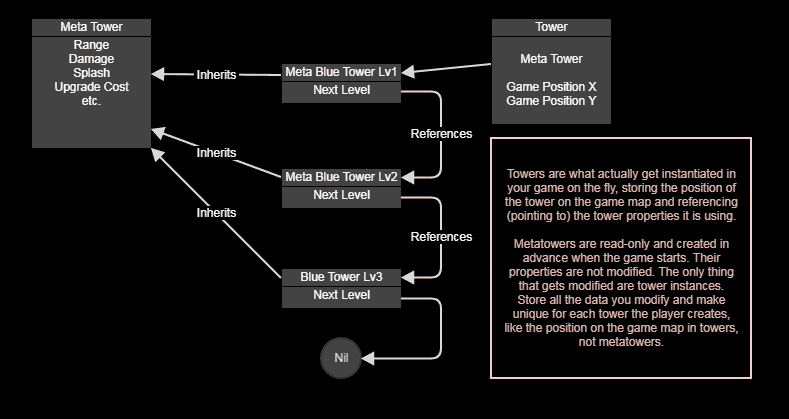 This is assuming a TD where the user can't do so much to make a single instance they create of a tower on the game map unique besides choose what type of tower they want to create, position it, and upgrade it. That implies very little unique data per tower the user creates, so you can just have the towers referencing read-only data (MetaTowers) you create in advance when the game starts up. You might have some other unique data like the experience points a tower accumulates before they're allowed to be upgraded if you have such a concept in your game. If so, you'd put that data in Tower, not the MetaTowers, but your MetaTowers might store how much experience points are required to upgrade.

The reason to have like MetaBlueTowerLv1 inherit from MetaTower is mainly just for polymorphism and to guarantee that all meta-towers (and the towers referencing them using composition) provide all the fields/functionality the game expects. If you have no such need whatsoever, then you can simply instantiate MetaTower instead of inheriting it.

Anyway, you avoid the issue of redundancy by separating the idea of read-only metadata from data which the user does modify. The metadata doesn't have to be read-only. It could just be referenced by all towers of the same type.

For example, you might offer the player an expensive upgrade that makes all blue towers more powerful, not a single blue tower. In that case, you can modify the blue tower meta data which all tower instances reference without looping through every single blue tower instance the user has created and having to add more code every time the user creates another blue tower, and if you ever want to add such a feature in hindsight, the flyweight pattern is especially useful. I couldn't think of a better name than "meta" in this case for the shared flyweight data, but hopefully you get the idea.

As pointed out, there isn't a very strong reason to use this design from an efficiency/memory standpoint. A TD is typically not going to instantiate millions of towers in a game session for the user to create and manage individually. However, avoiding the redundancy here by using flyweights can give you some more breathing room with the design and make it a little easier to reason about the game logic.

Not the answer you're looking for? Browse other questions tagged design design-patterns architecture or ask your own question.

3
Architecture for adding projectiles to a Tower Defense game that uses Flyweight pattern for towers?

2
Is the Observer pattern adequate for this kind of scenario?
6
How to refactor my design, if it seems to require multiple inheritance?
6
How can I add properties to subclasses and access them without casting from a superclass?
1
Object passed to super() referenced by subclass - Any Violations?
3
What's the proper way to create a list of several slightly different models?
3
Architecture for adding projectiles to a Tower Defense game that uses Flyweight pattern for towers?
3
How should I track which monster is first in a Tower Defense game, and is it ok create an extra attribute just for this purpose?
1
Design pattern for common properties: static properties or a separate single instance class?
2
How to store objects with inconsistant properties
3
Problem with runaway number of properties