Why is the ampersand (&) a HTML Entity?

I understand the rationale behind why most of the HTML character Entities were created, but I don't understand the purpose behind the ampersand HTML entity. &amp; contains more bits than a & symbol, and it even has the & inside it already!

Why was it decided that ampersands should be encoded in the format that requires more data, instead of just using the symbol?

To avoid ambiguity. Suppose you want to write a website about HTML. You write the line: "To write a literal < you have to write &lt;." Now, to write that down in HTML:

... oops. To make it work, you have to have some way to distinguish the character & from the HTML syntax starting with &. So that's why you have to write:

It looks like this goes all the way back to SCRIPT which was invented in 1968.

Why choose &? well imagine you are in a terminal window. you have no mouse. you can not use the cursor keys to traverse the screen. You can only type on the command line. if you want to delete a line, type %, to delete a character, type @

You can see towards the end ¢ is used to denote an escape character. cent used to be on keyboards (shift 6), but was dropped. (something to do with ascii) most keyboards replaced it with ^ but some with ¬

So all of sudden to program in SCRIPT you have a super hard time typing the escape character on new computers. You need to pick a replacement character, If you use one the symbols on the same key, some people aren't going to be able to type it, because keyboard makers are still arguing.

You need to choose a replacement escape character for the one that used to be on key 6. What do you choose? 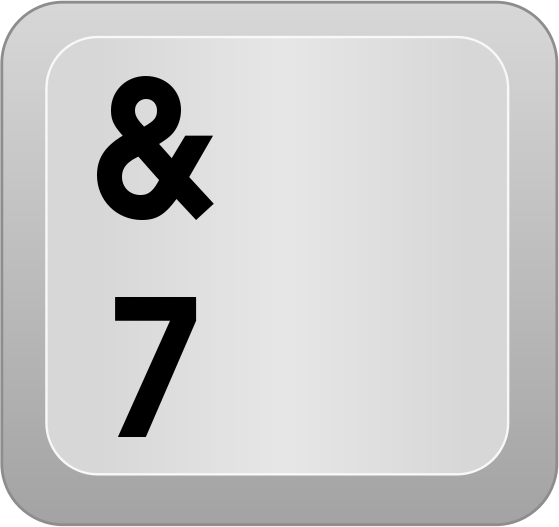 In any data format, the escaping mechanism must be escaped itself. The escape character is a special character.

For example, I want to display this text:

If I write this HTML as

it will be displayed as:

So I actually need to write:

which displays correctly as:

In many languages, the backslash is an escape character. Then, the literal string C:\projects will have to be escaped as C:\\projects.

If a data format is supposed to be able to represent arbitrary data, it either needs a known length, or a delimiter. Handling known lengths is unwieldy in human-editable formats. But if we have a delimiter, it must be escapeable. So we need an escape mechanism, and the escape mechanism needs to escape itself. One minimal solution is to use the delimiter as the escape character. E.g. for a delimiter ', the string don't do that could be encoded as 'don''t do that'.

Because "&" starts an entity, so using it by itself isn't valid HTML (although some browsers may accept it, this isn't guaranteed).

Every programming language or scripting language has its unique identifiers or you can say reserved keywords that can not be used by developers in the code. Some characters are also reserved in the HTML. An ampersand (&) is used as an entity to display reserved characters in HTML. Some of the examples are as follows.

Not the answer you're looking for? Browse other questions tagged html history entity or ask your own question.

20
Why no client-side HTML include tag?
27
Why was the percent sign (%) chosen as the format specifier for the printf family of functions?
122
Why is 0 false?
38
Why was strict parsing not chosen for HTML?
2
Complex fetching of Domain Objects
4
Why did Shannon's outguessing machine beat Hagelbarger's?
59
Why did SQL injection prevention mechanism evolve into the direction of using parameterized queries?
2
How chose a design for an event system
11
How to design the aggregate boundaries?
1
How to decide on abstraction level and entity definitions?