I've got two applications - one application is essentially a REST service, another app has UI that communicates with REST (uses it facilities).

The idea is that rule engine is a service that can execute rules against the input - input is not neccessary player data but some other (like level specific, or quest specific and so on). So I made it into a separate microservice. But as REST it has to validate the input - the input may come not only from UI application (that could provide its own checks) but from some REST client - so I decided to create a database for rule engine service (because microservices supposed to have its own storages) that would contain the data that allows to validate the input. Sandbox application represent some kind of admin or sandbox where I may create players, do some test runs like level up and so on. It has its own database too because it is more or less reflect the final another application. 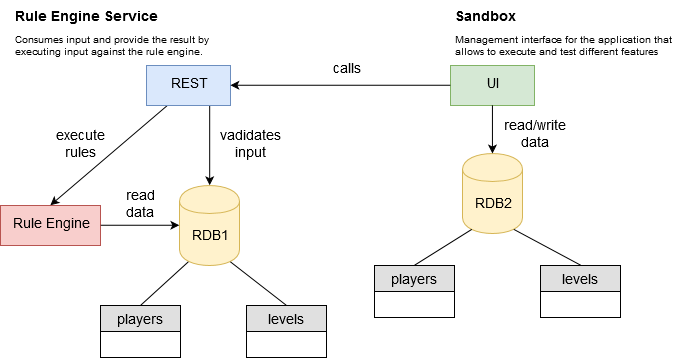 Sandbox UI application sends REST requests to Rule Engine Service with some data. Rule Engine Service validates the data against its own RDB1 (which contains the same data as RDB2 in sandbox - tables players and levels are the same in both databases so they data should be consistent), does execution of rules and returns the response.

My problems is to choose the strategy how to synchronize both databases to keep it consistent (for now at startup I populate both databases with the same data). I see several approaches

What approach it would be better to use? Or are there some other ways?

So it seems to me that unless you have a good reason to have separate databases, you should just have one database. It looks from your diagram like the Rules engine is essentially getting read only access while the UI gets read/write.

If that's true, then you could either share the same DB or else have the UI-backed one be the master and the Rules one being a slave to it. Let the DB handle replication, since it's built to do that.

3
What does it mean for an architectural style to be document-centric?
11
Synchronization between two systems using MongoDB as changelog
1
Shared database vs tightly coupled message model
7
How to store and validate data between state transitions?
0
architecture for the application
0
storing domain in multiple storages
2
architecture for services doing very expensive computations
0
What types of Google Cloud application should I consider for something running as a continually available service that subscribes to a pub/sub?
1
Sharing data between services in events based architecture