I am building a web application that will retrieve results from a remote server and use them to render some charts and maps. The remote server has already been implemented and contains a large amount of APIs, written in Java Spring Framework. The developer that implemented them, has given me access to a set of non-public endpoint URLs, which I will query and get the results in JSON format. Please note that some time in the near future, some of these APIs will be sensitive and should be limited to authenticated users only.

From my side, I am developing only the frontend with ReactJS. The entire logic of the calculations, the user maintenance, the authorization/authentication as also as the user input, happens on the remote server via these API calls.

Now, my question is this: where is a good place to put the web service calls? As far as I am concerned, there are two options:

The quickest and easiest way is to go with the first approach. But is it a good practice to have sensitive API calls, that due to the nature of the application are subject to change anytime, in the JS code which is only for rendering the client-side?

By having a second set of calls in my local backend, I am allowed to decouple the remote APIs from my application, maintain them more easily, change and secure them and remove the ability from an end-user to inspect the webpage's code and see the actual URLs in plain format.

I know of course that the end-user will be able to see some API calls, but I am more comfortable with him seeing mine APIs (going into my backend), than giving him the ability to see (and maybe use) the remote APIs.

Here's is a simple sketch of the two alternatives: 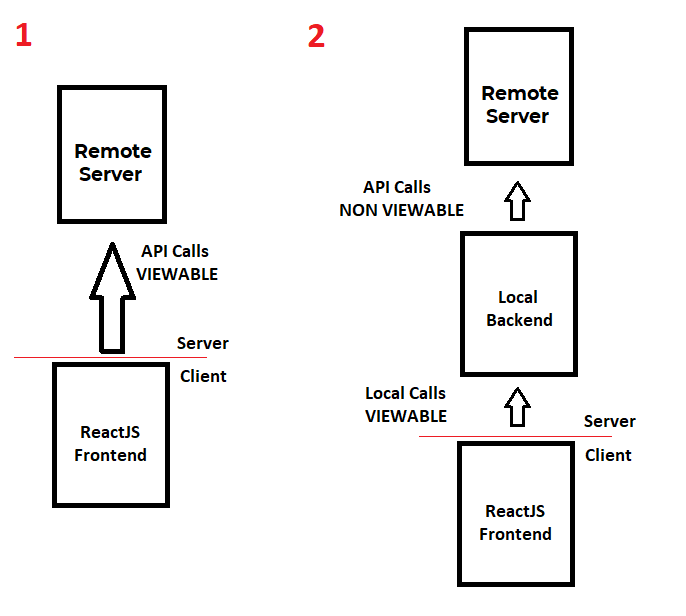 Is there any obvious gains by following the second approach or am I over analyzing this?

A framework/language or any other technology will not save you. By that I mean that Django is not your only option. What you should focus on is the design and do the implementation on the technology you are most familiar with (if this is not just a personal project). Having that in mind, I would try to make both ends as much independent as they can be. That means that ReactJS (or the frontend) should not hold any data, that are not to be presented to the user.

An approach I think would work:

As for the communication an alternative to AJAX would be websockets.

These two concerns, security and encapsulation need to be addressed at different places in the tech stack.

Not the answer you're looking for? Browse other questions tagged javascript programming-practices web-services backend or ask your own question.

21
Is it normal design to completely decouple backend and frontend web applications and allow them to communicate with (JSON) REST API?
2
Architecture for OAuth2 - BackendServer - FrontendServer
0
What types of operations should go into Node.js as opposed to client side javascript functions
1
Ways to authenticate and redirect with decoupled front-end web application
2
Best practices for calling multiple APIs and manipulating data before showing it to user?
4
Clearing up misconceptions about a Flask backend and client-side rendering
0
The Frontend-Backend Vs. Backend-Backend
3
Where should the display messages on the UI be stored?