How to find all possible paths with specific length in hexagonal game board?

I am currently developing a simple game in Unity.

I got a game board composed of hexagons. Let's say, the red dot is the player. 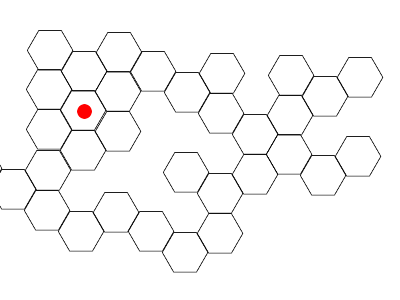 Now I want to show the user on which fields he can go, depending on the number he diced. The user should not be allowed to enter one hexagons multiple times in one move.

Is there any algorithm to solve this path problem? I've only found algorithms which asserted whether there is a connection between two nodes, but no algorithm to get all possible moves.

Yes, in fact most algorithms that check whether there is a connection between two graph nodes also compute what the connection is. It's just a matter of not discarding the information that was used to make the yes/no judgement and instead returning it.

Path-finding algorithms are almost always recursive in nature: if the target node is adjacent, the answer is yes, otherwise check (via a self-call) whether it's adjacent to any of the adjacent ones, etc. Actually constructing the path just means returning a partial path on each call, which ultimately resolves to a complete path if the top-level call succeeds.

The best resource for hex-grid algorithms I've ever read is this Red Blob Games article, and it has a whole section on movement range. It says:

If there are obstacles, the simplest thing to do is a distance-limited flood fill (breadth first search).

Not the answer you're looking for? Browse other questions tagged game-development path path-finding or ask your own question.

19
Generic rule parser for RPG board game rules - how to do it?
8
What would be the best way to store movements on a game to allow a rollback?
3
I'm struggling with abstracting my animation code in my game using a functional style. How can I do this?
3
A* with possible multiple paths
3
How to deal with relative paths in out of source build?
2
Algorithm to check for legal moves in Cluedo boardgame
0
How to efficiently solve "close" players/items in an online game without iterating through all of them?
0
Card game with unique abilities - how do i implement this
2
Enforcing changing rules in a board game - how to do it?